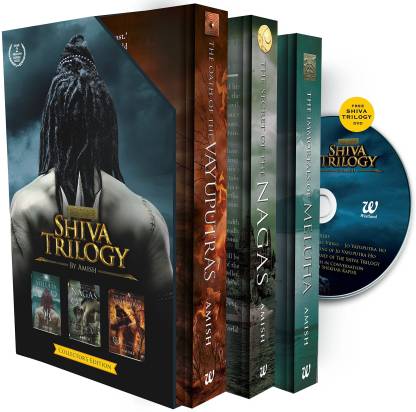 The Shiva Trilogy has been the fastest selling book series in India. The series of books describe Shiva’s journey and his experiences in the perfect empire of Meluha.


Summary
The Shiva Trilogy is about Shiva’s journey from human to supreme being. He travels to Meluha, the perfect empire build by Lord Ram with his tribe. The Meluhans believe that Shiva is their saviour and will help him in their war against the Chandravanshis, who have allied with Nagas. In the course of the rivalry against them, Shiva comes across Kali, Sati’s twin sister and Ganesh, Sati’s first born child. Sati gives birth to Karthik. In the third and final part of the trilogy Shiva discovers the truth about the Somaras and a battle follows suit.

Amish is an Indian author. The Shiva trilogy was his first set of novels. He is an alumnus of the the Indian Institute of Management, Kolkata.He has been working for 14 years in the financial sector, before moving to a career in writing.

Since everyone quite knows about the content of the book I will talk about the product. The three books are in hard covers with three separate bookmarks. The case is very useful which comes along with the books. The best part is I got it for just Rs 899. But after a few days it was available for around Rs 730 just for a day. Nevertheless my money was worth spending on this Collector's edition.
READ MORE

Novelty of thinking, attractive plot, smooth flow of the story makes these enjoyable.
DVD is not much an issue. The packaging is wonderful, but the binding could have been better.
Fast Delivery by Flipkart.
READ MORE

Awesome with a capital A.

I should thank my luck that when I bought this boxed set it was only Rs.1000. Now it has become more than Rs. 2000 !!!! Bit heavy price I should say. But the books were received in perfect condition. I won't say anything about contents of the books, because the name Amish says it all.
READ MORE

Got this within two business days - and that too at a price of Rs.773! Flipkart rocks!

And the story is a nice way of repackaging ancient Indian mythology for the modern times. Perfect for the twenty-first century youngsters. Amish's penmanship is great. It keeps the readers glued to the pages.

Over all, it's a must have for an Indian bibliophile!
READ MORE

Pperfect compilation of myth and rationality. The way author connotes the heroic essence of men in one alchemy could not have been better than the protagonist lord shiva.
a must read masterpiece for the lovers of art and creativity!
READ MORE

A must read.
Way the characters in the books get introduced & linked to the mythological beliefs is amazing... Specially Lord Ganesh & Goddess Kali.
READ MORE

I didn't get any DVD along with this
READ MORE

The book pages were torn. There was no DVD. I love shiva trilogy but the quality of hard copy book was not worthy. This review is only for the quality of the hard book and not the content.
READ MORE