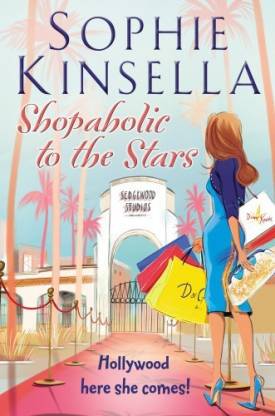 Shopaholic to the Stars is the 7th book in Sophie Kinsella’s Shopaholic series of chick lit novels.

Becky Brandon’s eyes are starry, mostly from her fascination with bigshot celebrities. She journeys to LA to be with her husband Luke, with her daughter Minnie in tow. There, in the land of multi-million dollar yoga retreats, herbal drinks and celebrities by the dozens, she finds a new dream. Her husband’s client is the famous actress Sage Seymour. Becky is determined to become Sage’s personal stylist, and she dreams of becoming the stylist of every major celebrity in the city. However, when Becky begins to work for Sage’s archrival, things get heated up in her household. Can Luke deal with this conflict? And can Becky keep her relationship and her career balanced?

Madeleine Sophie Wickham, better known as Sophie Kinsella, is an English novelist known for her chick-lit novels. She has also written The Secret Dreamworld of a Shopaholic and Shopaholic Abroad.

The first two novels in the Shopaholic series were adapted into the film Confessions of a Shopaholic starring Isla Fisher.

This book was a disappointment

As the title suggests, this book was not up to the mark. I didn't like the plot, and I didn't like Rebecca, which is a first( most people got tired of her from book 3 itself). But I still held on, because I loved Rebecca and I loved Luke and I really wanted to stay in their world and know what happened to them. The book ended rather very abruptly just for the sake of ending it on a "good note", "something to look forward to in the next book" note. But as I said, I'm really loyal when it come...
READ MORE

Becky is too irritating for words in this book.
Earlier she was adorable and easy to forgive, even empathise with.
This book has just lost it!
READ MORE