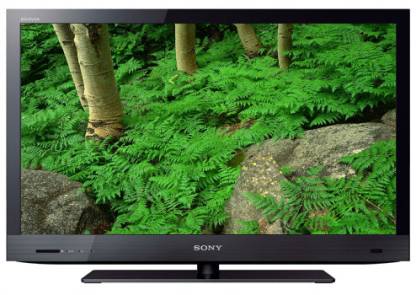 Get notified when this item comes back in stock.
Home
Home Entertainment
Televisions
SONY Televisions

If you have stepped back in the past from buying a 3D television due to the steep prices, then the Sony KDL-32EX720 could make you take that step forward. Affordable price tag, abundant features and innovative technologies are the distinguishing features of this 3D television. This 32 inch TV from Sony is one of the first televisions in this size to be equipped with 3D capability.

Featuring a Full HD resolution, this Series EX720 LED TV shows off even the minutest details in absolute clarity. The LED TV packs in the standard Internet on TV features and lets you browse the Web effortlessly. You can connect a LAN cable to the Ethernet jack and stream videos of your choice via the Internet Video function. Wireless Internet connection can be made as this TV is Wireless Ready (adaptor to be bought separately).

The Sony KDL-32EX720 makes you a couch socializer as you can reach out and video chat with your family members through Skype (camera to be bought separately) or update your status and follow your friends’ via Facebook and Twitter applications that are preinstalled in the television.

Another highlight of this 3D television is that it’s an energy saver. Consuming 93 W of energy in operational mode, the TV requires to be plugged into a power source of AC 110 - 240 V, 50/60 Hz to start functioning. The standby mode power consumption of the TV is only 0.2 W. Equipped with a Presence Sensor that detects the presence of people in the room and on finding no one in its range, turns the TV to Picture Off mode. This process helps in reducing power consumption by 50 percent.

Design
View your favorite programs in the 32 inch screen of the Sony KDL-32EX720 in brilliant 1920 x 1080 pixels resolution. Enjoy widescreen viewing as the LED TV has an aspect ratio of 16:9. The tabletop stand provided with the TV has swivel and tilt features that give you the flexibility to adjust the TV placement as per your convenience. Upon placing on its stand, this Full HDTV measures 755 x 510 x 216 mm and weighs 10.4 kg.

Video and Audio
The X-Reality Picture Engine in the Sony KDL-32EX720 analyzes every scene to produce well-defined images. With 240 Hz refresh rate and Motionflow technology, you will enjoy action movies as they have minimum lags and faster transitions. The Simulated 3D option eliminates the need to own a 3D player as it renders 2D content in 3D. Nifty features like 3D Comb Filter, Deep Color, Live Color and others further help in delivering superior visuals.

To complement the enthralling video delivery of the TV, Sony has equipped this 3D TV with 2 built-in speakers that produce powerful and lifelike sound. Having a combined sound power output of 20 W, the KDL-32EX720 boasts of NICAM Stereo and several Dolby-patented technologies. For a theater-like surround sound experience, this LED TV has the S-Force Front Surround 3D technology.

Features and Connectivity
Enjoy supreme connectivity on the Sony KDL-32EX720 with 4 HDMI and 2 USB ports, 1 Headphone Jack and more that help you in having a simplified home entertainment setup. Connect compatible devices through the BRAVIA Sync function using HDMI cable and regulate them using the TV’s remote control.

The Picture-in-Picture feature enables you to view two programs in one screen simultaneously. Enjoy movies, music and images on your TV screen instantly through the USB Play option. You can also connect a VAIO keyboard to the Sony KDL-32EX720 for enhancing your Web browsing experience.

The DLNA-certification of this 3D TV paves way for wireless transmission of multimedia files from other compatible devices. Other useful features incorporated in this Sony Full HDTV include Teletext, Picture Frame Mode, OSD Language and more.

Buying Tips
With a wide viewing angle of 178 degrees, you can enjoy all your favorite programs with the whole family in the Sony KDL-32EX720. The Edge LED backlight technology integrated in this 3D Full HDTV enables it to have a slim profile and use minimal energy. Add to all this, the 3D viewing ability of the television makes entertainment more exciting for you and brings in a whole new dimension.

I recently bought this TV and I am VERY pleased with it! When it comes to picture quality, no one can match SONY. The simulated 3D feature(which converts normal 2D transmission to 3D) is particularly good but this can be best observed if you have an HD transmission.
The only think to be aware of is that this TV only supports FAT12, FAT16, FAT32 and exFAT file systems for usb playback and therefore if you have an external HDD from where you want to watch videos or listen to songs and the file...
READ MORE

Yeah Buy this one!!

The only flaw is the audio quality, i have this tv now for a year, i bought this one for 83k and now its available here for 70k which is a steal