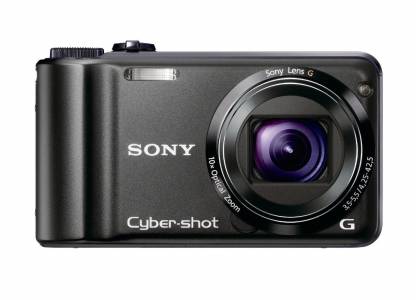 Description
The Sony DSC-H55 belongs to the Cyber-shot family of point and shoot cameras. This 14.1 megapixel camera comes loaded with a CCD sensor. The Sony G-Lens of the camera has a focal length of 4.25 - 42.5 mm for the 35 mm equivalent format. You can zoom your Sony camera up to 10x optically and 20x digitally.

This Sony camera weighs 200 g, including the Battery and memory cards. High definition videos at the resolution of 1280 x 720 pixels (30fps) can be recorded by the camera. The DSC-H55 is powered by the BIONZ image processor. The aspect ratios supported by this Sony camera are 4:3 and 16:9. This Cyber-shot camera has a 3-inch Clear Photo LCD display with a resolution of 230,400 pixels.

The rechargeable Lithium-Ion (NP-BG1) Battery comes installed in this Sony camera which can take 310 shots before discharging completely. The camera has an internal memory of 45 MB which can be extended by using the SD, SDHC and SDXC memory cards.

This Sony point and shoot camera is also compatible with Memory Stick Duo, Memory Stick PRO Duo and Memory Stick PRO HG-Duo. Your Sony camera can be easily connected to any laptop or PC with the high speed USB 2.0 to view or transfer pictures and videos.Once the pictures are transferred, they can be deleted to empty the occupied storage space so as to capture multiple memories.

The Optical SteadyShot Image Stabilizer installed in this Sony camera detects camera shake and shifts the lens automatically to prevent blur without damaging the image quality. You can also set a self timer before clicking the pictures with a delay of 2 - 10 seconds. The continuous shooting speed of this Cyber-shot camera is 1.84 fps.