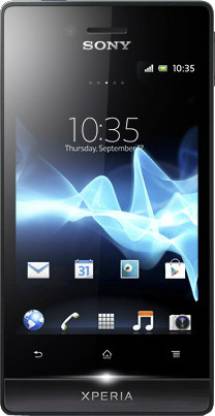 The Sony Xperia series phones have made a name for themselves as reliable and sturdy devices. The latest offering from this flagship brand is the Sony Xperia Miro, a device which promises to pack a lot of punch in the features that it offers. The device comes in a bar form and is run on the trusted Android v4.0 (Ice Cream Sandwich) OS. The operating system is backed up by a powerful 800 MHz processor as well as 512 MB RAM to ensure the smooth functioning of the multiple applications that can be run on the device.

The Sony Xperia Miro comes with a 3.5-inch TFT Capacitive Touchscreen which provides a HVGA resolution of 320 x 480 pixels. The phone uses the Timescape user interface which makes the interactivity between user and device simple and easy.

This Sony Xperia comes with a powerful 5 megapixel camera which doubles up as a video recorder too. The camera is backed up by an LED flash for clicking pictures at night as well as a 4x zoom function. The camera comes with additional features like geo-tagging, auto focus, video stabilizer and touch capture which contribute to enhance the usability of the device. A 0.3 megapixel secondary camera allows the user to conduct video calling easily.

The phone is a stylish device and comes in large rectangular frame. The phone weighs in at a lithe 110 g and comes in dimensions of 59.4 x 113 x 9.9 mm which makes the device quite slim as well. The Sony Xperia Miro comes with a magnetometer, an accelerometer as well as a proximity sensor.

This Sony mobile comes with a 4 GB internal memory, 2.2 GB of which can be used by the user. The memory on the phone can be increased via the expandable memory card slot which can boost the memory by up to 32 GB using a micro SD card. The device is run on a 1500 mAh Li-Ion battery which promises the user a talktime of 5 hours when used on the 2G network.

The phone is highly capable of keeping the user connected to the internet. The device comes with a pre-installed Android browser which can be used to browse the internet via the GPRS and EDGE platforms present in the device. For a faster browsing experience, the phone can also access the 3G network. The WiFi capability of the phone allows the user to access a wireless network in their immediate vicinity. The phone can be tethered to another device using the micro USB port or WiFi hotspot functionality. Files can also be exchanged using the Bluetooth function which is present in the device. This Sony Xperia can also be tethered to another device using the WiFi hotspot functionality or the USB port. Additionally, the device acts as a navigation aid in the form of Google Maps which uses assisted-GPS technology.

The phone is an ideal entertainment aid as it comes with a music player and video player to keep you busy on the move. The device features xLOUD audio filter technology as well as TrackID Music recognition to enhance the audio experience for the user.

Social networking Apps such as Facebook, Twitter and Google Talk come pre-loaded into the device to keep you connected to friends and family from anywhere, thus making the phone a worthy buy.

Make A Smart Buy(Think Before U ink)

@rohit yadav, you are making a right choice by buying this phone. Its a good handset,of course with its own pros and cons.
This is my first android smartphone and thus i cant exactly comment on the credibility of my review because being my first hi end phone i am completely happy with it.

so ,lets start off with the screen. It has a 3.5" TFT scratch resistant screen with a resolution of 380x480 pixels which is pretty decent though some phones in the same range may give you a larger 4" screen...
READ MORE

I got the delivery today via flipkart self delivery. Response given from flipkart was really nice. My first android phone so,
According to me Camera quality is awesome, with led flash. Facebook integrated in xperia feature really helps,
According to themes the notification light changes d colour. Nice sound clarity.
Android ICS 4.0 ..
Internal memory..2gb accessible, which is not bad.
VGA front facing camera is bit dark, and no additional features like brightness given..
Overall i will say a...
READ MORE

*You cannot find branded phone with ICS 4.0.4 along with LED flash 5MP quality camera in this price range. best you can get.
READ MORE

Best phone in the range...

Here someone is comparing it with DELL XCD 35 but it is not woth comparing...Miro comes with android 4.0 ICS and dell comes with android 2.2,,,Miro has 5mp camera with flash and front camera and dell comes with 3.2mp camera and the most important thing is dell have 200mb internal memory and miro have 4gb internal memory. There are more features that sony xperia miro have but dell xcd 35 does not have like dlna certified,3D and motion gaming..
I just want to say that i have purchased and expe...
READ MORE

good product with some serious confusions

1st to flipkart, this the 2nd time I got delivery of any product late then expected.
now to the set, it looks so much classy then the other companies android phone in this budget. the ICS runs smoothly instead of having 512MB RAM. it runs motion sensing games without any hazard & the default launcher is so good that i tried many launcher but nothing attracts me more. about the internal storage i installed so many apps & games but it till shows me 700mb empty. the display is quite good of this...
READ MORE

Hi I bought this phone yesterday and amazing features.
The Touch pad sensor as compared to any Samsung phone is far better.
Sound of the Phone is amazing. Video Resolution gives you a feel that you are watching live Movie on a LED Screen despite this set doesn't have BRAVIS engine.

All in All a very satisfied user and would recommend to you all.
READ MORE

Best if Price is big consern....

It is just an average phone to satisfy the people who can't afford Xperia U or Xperia J.

Bad......
1. Camera is great only in good sun light. Not good even wen shooting in cloudy. Flash is use less one.
2. Battery life is not at all good, Sony is true in this thing 2-3 hr if fully on net(2G),even worse if in 3G.
3. Heat production is too high.
4. Speakers not covered well, if we place the phone on a level surface(Screen upward)
we will not here the ringing of the phone...
5. We have to remov...
READ MORE

Good hardware specs for the price. Size, weight and dimensions are good. Apps run well...overall a good phone. The only thing negative..is the screen resolution even if i am willing to forgive the camera(5MP).
READ MORE

Awesome design, Excellent experience with Android v4 OS, Excellent 5MP camera. More memory space in the phone, so that we can install all types of apps and enjoy... Excellent voice quality in speakers. Price should have been reduced to 13.5k or give some offers like free 8 GB memory card and so...
READ MORE

2
0
Permalink
Report Abuse
+
All 116 reviews
Have doubts regarding this product?
Safe and Secure Payments.Easy returns.100% Authentic products.
You might be interested in