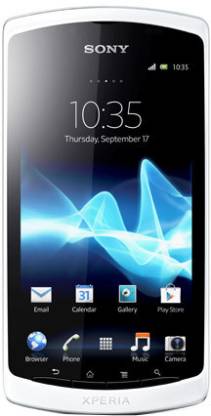 An extension of the Sony Xperia Neo series, the Xperia Neo L is a mid-range smartphone filled with multiple clever features. Like the Xperia Neos preceding it, the phone comes in a bar shape. The device is run on the sophisticated and futuristic Android v4.0 (Ice Cream Sandwich) OS and possesses a dynamic 1 GHz Qualcomm Scorpion processor. A 512 MB RAM warrants its ability to smoothly run apps on the phone.

The relatively large display is a 4-inch TFT capacitive touchscreen and provides a resolution of 854 x 480 pixels. The scratch resistant screen provides a level of ruggedness to the device. The UI provided by Sony on the phone is Android’s very own Timescape which incorporates a degree of simplicity for the user.

There are two cameras on the Sony Xperia Neo L. The rear facing camera is a powerful 5 megapixel device which is accompanied by an LED flash so as to click pictures under minimal lighting. The camera allows the user to record video in 720p HD at 30 fps and includes features such as Auto Focus, Touch Focus and Geo-tagging which combine to make the picture-clicking and video-recording experience very enjoyable. The front-facing 0.3 megapixel secondary camera allows the user to carry out video calling easily.

When designing this phone, the makers have paid close attention to aesthetics. This is seen in the phone's dimensions which are 61.1 x 121 x 12.2 mm. With a thickness of 12.2 mm, the device is extremely slender and comfortable to hold. Additionally, the phone weighs in at 131.5 g which makes it quite light in the hand. The Proximity sensor, which prevents the user from tapping unnecessary buttons when held close to the ear and the Ambient Light sensor, which changes the brightness of the display according to the surrounding environment, manage the display effectively.

The device comes with an internal memory of nominal 301 MB. However, it includes a 2 GB memory card within the device. The memory on the phone can be expanded to up to 32 GB using a micro SD card. The relatively high specifications of this device require an equally capable battery. Hence, the phone is powered by a 1460 mAh Li-Po battery which promises to provide up to 7 hours of talktime on 2G or 3G networks.

The Sony Xperia Neo L is well equipped to keep you connected at home, work or on the move. It comes packed with GPRS and EDGE technology for data transfer over the 2G network. The device also comes with HSDPA and HSUPA technology for optimized data transfer over the 3G network. This Xperia Neo L is WiFi enabled to let you access the internet from a wireless network. The phone can be tethered to another device using the WiFi hotspot or through the micro USB port. This Sony Xperia Neo has GPS support in the form of A-GPS which enhances the ability to locate the user with the help of Google Maps. Files and documents may also be transferred using the Bluetooth functionality.

The phone promises to keep you entertained with the help of the inbuilt music player. The music experience is further enhanced with xLOUD Audio technology which improves the audio quality of the device. If that doesn’t satisfy the user’s entertainment needs, the phone comes with a video player as well.

Social networking on the Xperia Neo L becomes easier with the Facebook, Twitter and Skype apps that are bundled into the device. The business features on the phone include Document Viewer and Document Editor. These features allow the user to manage and edit office documents on the move. The Pushmail feature is for users who need to stay connected with their Email on the go.

Not Good for Gamers, photo and Loud music lovers.
good for call, book reading and brows.
Camera:- utter waist will not focus fast (auto focus) cannot take near images, get blurred,should be absolutely still. not sure you will get a clear image in a single shot so not recommended for functions.flash will make you blind.
speakers:- make lot of vibration (no need to put in vibration sound will make the phone vibrate)in full volume. No FM, No sound recording.
response:-RAM and phone memory is not...
READ MORE

Really a very nice phone at this range.

> The neo L looks very similar to the Neo and Neo V in terms of design. But this time round, the device has a 4-inch display that also makes it heavier at 131.5gms. The phone is bulky in its build but is solid.
> Beneath the skin, the Xperia neo L features a 1500mAh battery.
> Overall, the neo L does have an attractive design but certain improvements would have been welcome.

Awesome look but not great in performance

First of all I want to say Fantastic and nice in look, handy phone (size not too big like canvas2 not to small xperia tipo) can be operated by one hand. When you unpack it you will fall in love with this phone.

Best in look, inbuilt hardware functionality
Good in business features, apps
Poor in Gaming, slightly in performance(not too good not too bad)

I own Neo L n LWW both by SOny.. So I am making a comparision with LWW

+ NEo L
Bigger Screen
Bigger battery
Out of Box ICS(Mostly we will get JB update)
Smoother UI
- Neo L
Same Spec as LWW(14K phone)
Same GPU,CPU,RAM..
No Loundness(LWW has two speakers)
Less ROMS at Xda as its fresh in market(If you like rooting n doing stuff U will have to wait No ROM or Kernels Avail now **Very Techy Not for normal Users)
HeadPhone that Comes with it is not Good...
READ MORE

Best Phone In The Range

Gallaxy Has Duel Sim. I dont think it is a good idea to use a android phone with a dual sim system because it increases the rate of uses power.

Neo L has 1Ghz Quall Scorpion CPU which is far way faster than that of galaxy s , miro & j.

Neo L uses adreno 205 as Graphics card, which is much better.

Low internal memory is the buzzkill

When you are using Android and you have such a low internal memory (usable 380Mb), you can't do much. Biggest problem that I faced is installing/updating apps which can't be moved to the SD card - like Facebook (pre-installed), Google Maps, Adobe Reader, any Antivirus, Whatsapp, Youtube, etc.

It also comes with some apps like some games, etc. which cannot be uninstalled and also takes up space. (Even though you click on uninstall and click ok and it vanishes from everywhere, after some hour...
READ MORE

I brought this phone few days back. I really want to tell you this is a fantastic phone. I really feel proud owning this phone. I am not a very techie person or not into too many high end applications. But I feel this phone has it all. This is my first smart phone...
READ MORE

wow !!!
u cant get any better phone for 18k - 4 inch screen and Android 4 (ice-cream sandwich is superb) speak d loudest for this phone

Cons
one and only one disadvantage is its rear camera , though 5mp , its camera quality sucks , plus there is no zoom

if u r ready to compromise for camera then just go for it without thinking a second , its d best what u r getting at this price
READ MORE

Touch provided in xperia neo l is of quite a good quality, sound and picture clarity is also up to the mark , first time i have purchsed the handset of sony , till now i was using nokia handsets ,i m quite satisfied with the features of this phone ,radio is not there in the handset and if you find that as a good reason for not buying this phone then it is totally up to you rest the phone is above averege and handy.
READ MORE

Guys this phone is awesome..I should say I got it for 13000 from the local market without warranty.
this my first android phone..and i should say

It impressed me very well..awesome

1)Great display 854x480 with 245ppi is amazing....
2)Camera quality isn't bad as people say its awesome,tried some MACRO SHOTS oh i must say its fantastic. i put those as wallpapers and my friends wasn't able to tell that it was a captured image.
3)audio quality is good considering device but the headset is ...
READ MORE

3
3
Permalink
Report Abuse
+
All 62 reviews
Have doubts regarding this product?
Safe and Secure Payments.Easy returns.100% Authentic products.
You might be interested in