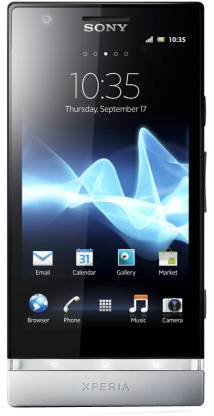 Sony has rolled out an effective mid-range mobile with the Sony Experia P. The phone is an impressive smartphone from the Sony Experia stables and similar to its predecessors, comes in the form of a bar. The device is run on the well tested Android v2.3 OS, upgradable to v4.1 Jelly Bean, and can also be upgraded to the much vaunted v4.0 (Ice Cream Sandwich) OS. The Sony Xperia P possesses a 1 GHz U8500, Dual Core processor. These specifications are supported by a 1 GB RAM to assure the smooth running of the multiple apps on this device.

The rectangular screen of this Sony phone is a 4-inch TFT capacitive display, which gives a resolution of 960 x 540 pixels. The display also comes with WhiteMagic Technology, which is a feature that allows the user to discern what is displayed on the screen even in the afternoon sun and helps to conserve battery at other times. Additionally, the Mobile Bravia Engine aids the display quality to a fair extent. The User Interface used on this device is Android’s very own Timescape.

The phone possesses a powerful 8 megapixel camera with an 8x digital zoom which will ensure excellent quality pictures. The secondary 0.3 megapixel camera allows the user to carry out video calls. The camera is accompanied with an LED flash. The camera features Face and Smile detection, Touch Focus, Image Stabilization, Red-eye Reduction and many more features that simplify the photography process. The Full HD recording feature on the device is capable of taking high definition 1080 x 1920 pixel video, at 30 fps, making the video shooting experience quite satisfying. The phone comes loaded with a geo-tagging feature that allows a user to obtain local information using the GPS function on the phone.

The Sony Experia P has a good weight distribution and is easy to hold in the palm of the hand. The edges are sharp and straight in appearance. The phone weighs in at 120 g and is neither too light nor too heavy when held. The screen is scratch resistant and has a shatter proof sheet over the mineral glass. The display comes with an ambient light sensor which is an intelligent sensor that adjusts the display brightness according to the surrounding environment.

The Sony Experia P comes with a sufficient internal memory of 16 GB. The colossal processor requires an equally efficient battery. The device comes packed with a 1305 mAh, Li-Ion battery which takes care of the power requirements of the device. The battery promises to offer 6 hours of talktime when used on the 2G network and offers an equally adequate 5 hours when used on the 3G spectrum. The device offers up to 80 hours of music playback and 4 hours of video playback to keep you entertained when travelling or when you’re sitting in an extremely boring meeting. Headphones are advisable for the latter case.

This Sony Experia will keep you connected in almost all the possible ways. Over the 2G network you can use GPRS and EDGE technology. For an optimized browsing experience the user can also connect to the internet via the 3G network. The device is capable of higher data transfer rates being HSDPA and HSUPA capable. That means the capacity of the phone to transfer data is enhanced compared to other 3G capable phones without this feature. This Sony phone is also WiFi capable when you are in a wireless network. The user can also transfer files and documents through Bluetooth or through the micro USB port. The device is capable of tethering to other mobiles through the USB and WiFi hotspot. Using the HDMI port on the device the user can connect and transfer audio or video data from this phone.
This Sony phone caters to the music lover with 3D Surround Sound and xCLOUD technology for an excellent music experience. Living up to being an all-round entertainment phone, the user can indulge in motion games like Asphalt and Tilt 3D or access the FM radio.
The device comes with social networking sites like Facebook and Twitter. Other apps such as Youtube, Google Talk with Video Chat, Google Latitude and the Android Market are bundled into this phone. Business features of the phone include Document Viewer, which allows the user to manage and access documents and presentations and Pushmail, which provides access to the user’s Email on the move.

Awesome will be a gross understatement

I have been using this phone for 20 days and this below is what I feel.....
I will not be dividing into pros and cons, please bear..

1) The camera is excellent with lots of pics better than my DSC and frankly speaking, for that WOW moment you wont have time to bring out, switch on your DSC to capture it, but this phone does just this with awe. Very fast capture speed. JUST one problem, sometimes there is extra light in indoor night shots.

The Sony Xperia P,standing in between the Sony xperia u and big daddy Sony xperia S,is the perfect mid range phone at the moment !it comes with the latest White Magic display and has the brightest screen on any phone in the world up to date!well talking about the exteriors it is gr8 to hold in ur hand as it has a 4 inch display with a unique rectangular design with some sharp edges make the design like any of the sonys contemporary design ! along with aluminium uni-body design u have the tran...
READ MORE

Though i bought long ago. I made this review acc to latest JellyBean

review after using the phone

got this phone 20 days back.. it is just stunning... really beautiful... a really handfull phone... doesnt have that slippery thing going on with it... the design is good and the transperent strip makes the phone looks better than the others of its kind.... but.. i know there is always a but in everything good... nothing come without flaws... the battery is little weeak for this phone... if u charge it completely in the morning.. and u are on the internet constantly or playing games or list...
READ MORE

When you buy from Flipkart: What comes in the box: Phone, Hands-free, Leather pouch, micro USB cable, AC adapter and documentation. There aren't any smart tags or a screen protector included.
However if you purchase it now, you get ICS out of the box instead of Gingerbread.

Build Quality: Superbly built, with an aluminium unibody, and well made buttons. The buttons do not wobble at all and are of high quality.

Software: Using the ICS out of the box, I did not notice any lags when I close...
READ MORE

A very good looking phone, quite a handful too! Works pretty well for phone calls but is slow for internet usage on 2G.( 3G signals weak in most areas). Packed with features, but useless if used only as a phone. Like using a Ferrari for commuting.
Battery drain is cosiderable (always has been in Sony, remember k750i). I stumbled a great app IPMPlus Battery Saver Lite. After installing this, the battery now lasts almost 2 to 3 days with moderate use.
READ MORE

Well I had initially planned to buy Xperia Sola but then I thought of spending a few bucks more and buy this beautiful artifact;Xperia P as Sony has confirmed that Xperia Sola will not get JellyBean :( :(
This one's a beautiful device and worth every penny.
But my experience suggests its better to buy the device sporting Android ICS out of the box instead of the one coming with Android GB and later upgrading it yourself to ICS.Believe me,some lags and bugs will creep in post upgrade. So if p...
READ MORE

First, for those who think that the battery is enough just because there is White Magic technology and what not, professional reviews have said it has mediocre battery life, so stop saying the small battery is fine.
Otherwise, the phone is great, everything is there for the price. Dual-core, Mali 400MP GPU, enough storage at 13 GB, it's a good phone. Display is sharp thanks to the high resolution.
Great phone, Sony is doing great with these low cost Xperia phones.
READ MORE

I am writing this review after using my XP for 1 week.

the design, look and feel of this smartphone will drive you nuts. its so sleek and beautiful.
coming to android..its really working nice. i have not upgraded to ICS yet because i goggled it and found a lot of reviews related to ICS issues and trust me..gingerbread solves the purpose..
camera is truly amazing..8MP is almost like 13MP..
feather light touch...

people who have issues with memories..trust me..13 GB is too much..u can sa...
READ MORE

I have been using this phone for the last 4 months. I bought this red one from a local market and it was Android 4.0 out of the box. two months back sony gave Android 4.1 upgrade to it ! Now it has stamina mode too. The display is excellent. Even when I am at home I rarely use my laptop. I instead prefer this phone both for movies and net surfing.

I also want to say something not only for this handset but for other handsets too. One should buy a phone that has screen size less than/eaqual to...
READ MORE

2
0
Permalink
Report Abuse
+
All 105 reviews
Have doubts regarding this product?
Safe and Secure Payments.Easy returns.100% Authentic products.
You might be interested in