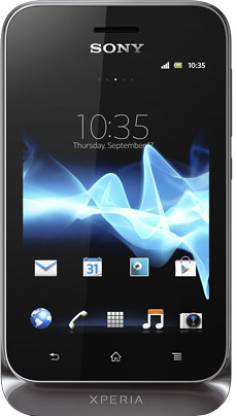 Sony’s flagship Sony Xperia series comes out with its latest offering, the Sony Xperia Tipo Dual. This Sony Xperia mobile comes in a bar form and is powered by an 800 MHz Scorpion processor. The phone is run on the smart and clever Android v4.0 (Ice Cream Sandwich) OS and also contains 512 MB of RAM to ensure the smooth running of multiple applications on the device.

The phone features a 3.2-inch TFT Capacitive Touchscreen which provides an HVGA resolution of 320 x 480 pixels. The phone also comes with the Timescape user interface which serves to enhance the usability of the device. The Sony Xperia Tipo Dual has a dual SIM (GSM + GSM) capability for users who require separate SIM cards for different network providers. Additionally, the phone features an Adreno 200 graphics processing unit which serve to enhance the visual experience for the user.

The phone features a 3.2 megapixel camera which is capable of recording video at 640 x 480 pixels as well. The camera features a 4x digital zoom in addition to other useful features like Geo-tagging, send to web and Self Timer.

The Sony Xperia Tipo Dual is a sleek and smart looking device and comes in dimensions of 57 x 103 x 13 mm. The phone weighs in at a lithe 99.4 g and features useful display features like scratch resistance, handwriting recognition, gesture support and multi touch. The phone also contains an accelerometer sensor, proximity sensor and compass to boost the ease of use of the device.

The Sony Xperia Tipo Dual is powered by an adequate 1500 mAh Li-Ion battery which promises the user a talktime of up to 5 hours when used on the 2G network. On the 3G network, the phone gives a talktime of up to 6 hours. This Sony Xperia mobile possesses an internal memory of 2.5 GB and can be expanded by up to 32 GB using micro SD card, thus giving you enough space to store your music and video collection.

The phone is capable of keeping the user connected to the internet via the multiple features it possesses. The device comes with GPRS and EDGE technology which will keep you connected via the 2G network. The phone also comes with HSDPA and HSUPA technology to keep you connected to the 3G network at a faster browsing speed. Files and documents can be exchanged using the Bluetooth functionality or the micro USB port in the phone. The WiFi capability of the device allows the user to connect to wireless network in the vicinity. The WiFi hotspot and micro USB port allows the user to tether their phone with another device as well. Additionally, this Sony Xperia phone also acts as a navigation aid in the form of Google maps which uses assisted-GPS technology.

The phone is capable of keeping you entertained through the multiple features it comes with. The music player, video player and FM radio features can keep you entertained on the move. Sound enhancements in the form of xLOUD Audio Filter technology and TrackID music recognition make the usability of the multimedia functions highly desirable.

Additional features on the phone include predictive text input, 3D gaming, Street view and Latitude. Social networking Apps include Facebook, Twitter and Instant Messaging allow the user to stay in touch with friends and family from anywhere.

Xperia Tipo Dual, cousin of Xperia Tipo is an outstanding creation released by Sony for the people who want to buy Android phones at an affordable rate. Of course people who want to use Dual-Core ones won't like the specification of this elegant and eductive masterpiece. My suggestion to them is: Before they superciliously reject this phone, they must know, not many people could shell out 25 thousand Quids to buy a smartphone and there are less fortunate ones who want to own an Android device...
READ MORE

1. Its a dual standby.. means,, when u r using one sim to make phone call/ using GPRS the other sim gets off.
SIM switch button is just awesome feature.Very easy to switch between sim's.
2. 3G is supported on both sim's but not at a single time.. i.e if u r using 3G on SIM1 den you can use only GSM mode on other.You can always switch d preferred sim for using 3G anytime.
3. Phone memory is 754MB+2.15GB i.e phone only(like whatsapp, GO sms) apps can be installed only in this 754MB space(Thi...
READ MORE

I bought this phone after originally contemplating Karbonn A5. Let me summarize the pros and cons

very good set. noticed some features which may have need attention.

pros
====
1. good look
2. os is good. internal memory provided helps storing bigger apps.
3. screen color is good. and well responsive.
4. sound quality awesome with xloud tech.
5. headphone is not so bad. much better than same type of nokia or samsung.
6. timescape interface is very good and fun to use.
7. can play some 3d games also.
8. screen is made of mineral glass. NO SCREEN PROTECTOR NEEDED :)

First of all I would like to say that I am using this tipo dual since 45 days. So all my review is based on that.
Pros:
1. The first thing that came in mind when I purchased this is that I am getting a Xperia series phone in 10k! I have thought about other Indian models from micromax, karbonn etc. but this phone gives me a kind of feeling of branded phone and not like some chinese re-branded phone. Also if I have purchased some micromax,karbonn etc. models then I may find myself ashamed in ta...
READ MORE

I bought this phone a couple of days back and I would like to share few merits and de-merits regarding this phone.

(1) The battery back up is very good compared to other Android mobiles. After charging the mobile to full 100%, I used continuously for internet browsing and watched youtube & daily motion videos for 4 hours. Then also the battery level is discharged to 65%. i.e., still there is 35% of battery back up.

Also note that the charging time is too fast. I...
READ MORE

Pre-ordered the device on Flipkart on September 12. As usual received the item on time and in good package on Sep 15 three days after it got launched. I already own an LG Optimus One P500 and was in search of an android mobile with decent hardware specs, dual sim and which runs on android ICS 4.0.4 update. This device precisely sufficed my requirements.

Sony has come out with yet another beauty!! a budget phone with almost all good features! battery comes for almost one day for a normal use compared to other android mobiles. dual sim with swap button.Xloud technology gives a good speaker sound.

P.S. Flipkart gives it in the most least price and a very fast delivery in a very proper packed condition!
READ MORE

I have been using this phone since 7 days. As mentioned by one of the reviewer, this phone is 'dual standby', that means, it can receive calls on both the SIM cards, but while making a call or sending SMS, one needs to switch. Even this switch is pretty easy, a dedicated button is provided or you can do this switch through an settings option as well.
As far as features, biggest factor for me to go with this phone is android 4.0 and internal memory of around 3gb. I don't think you can get thes...
READ MORE

2
0
Permalink
Report Abuse
+
All 170 reviews
Have doubts regarding this product?
Safe and Secure Payments.Easy returns.100% Authentic products.
You might be interested in