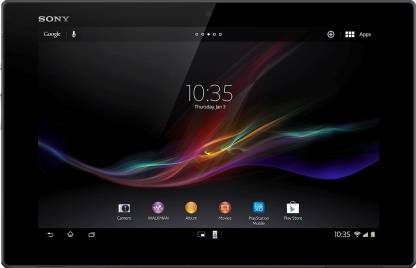 Sony has always been at the forefront of product evolution in terms of design and technology. The Sony Xperia Z Tablet is a testament to just that. The seamless design and smooth flowing lines of the tablet will allow it stand out from its competition. Tablets have always been an important bridge between phones and full-fledged computers. These days however, the processing power available on these devices makes them as powerful as computers.

The Sony Xperia Z Tablet comes with a 10.1 inch Reality Display with Mobile BRAVIA® Engine 2 technology. This is a huge step forward for Sony as the upgraded BRAVIA Engine 2 allows for clearer, sharper images while saving on energy requirements. The WUXGA TFT Capacitive Touch Screen comes with an effective resolution of 1920 x 1200 p, allowing you to fully experience HD videos and Images. The device is very light at 495 g and measures in at just 6.9 mm in thickness. The single SIM GSM device supports 2G, 3G and EDGE along with other popular connectivity options via the SIM.

The 8 MP primary camera is capable of Full HD recording and comes with Exmor RS technology. It is capable of Fast Capture. The Secondary 2 MP camera is capable of Full HD video chats with Exmor R technology. The main camera comes with Superior Auto HDR as well. The Snapdragon S4 pro 1.5 GHz Quadcore A15 processor uses the next generation Krait Technology and is capable of delivering phenomenal performance. This is augmented by the 2 GB RAM present in the device. The device comes with a total of 32 GB memory, split up between a 16 GB eMMC and a 16 GB Memory Card. It can be enhanced to another 32 GB via micorSD cards. The 6000 mAh battery gives a solid stamina to the device, even on 3G modes.

The device comes with NFC, Screen Mirroring, MHL, IR Remote, Wi-Fi Direct and Bluetooth v4.0 connectivity. Sony brings back its characteristic xLOUD function with the Xperia along with VPT, Clear Audio and S-Force Front Surround 3D technology. Additional to all this, the Xperia Z Tablet also comes with a Free Leather Case worth 3000 Rupees. With the Bundled Sony Music App, you can download 1.5 million songs for free. The Sony Liv App allows you to watch KBC, Indian Idol and online TV Serials present in Sony and Sab TV channels.

- The tablet is absolutely feature-rich both in terms of hardware and software.

- It supports 3G/4G data and text messaging (just like most 3g dongles) but for calls you'll have to use Viber/Skype or similar.

- The display is sharp and vivid.

- Moreover, I got a leather case and a 16GB memory card bundled with it.

- I ran most benchmark tests available and this was the android tablet t...
READ MORE

Sony At its Best

I ordered this tablet within one week of its launch just seeing the reviews online and its specs. Compared it with latest Ipad and found almost every spec to be superior. Trusted the Sony brand and ordered it via Flipkart, without even going to the store to get a feel of it.

And I was taken aback when I took it out. First impression:
- Brilliant design
- Super Thin
- Good to hold

After putting it on:
- Outstanding Display
- Great Touch Screen

Now that I have used it for over a month, I do...
READ MORE

Its better than you'd expect....

It really is all you can wish for..
Nice response, really good graphics, Sound quality really blows my mind.
Dual speakers, 10 inch screen, IR burst, waterproof!
Also, Awesome standby time...battery drained by 2% in a day and a half when left alone.
7hrs of usage time. It really covers all the bases except for the camera... but who would want to take pictures with a 14inch device in their hands.. all things considered.. this is a good buy.
READ MORE

Leaves the Ipad far behind

I don't have to go into the specs, its all listed on this page, so its a user experience feedback.
First the Bad
1.As said by another reviewer the power cable is short!! would be very difficult to use while charging.
2. as usual, sony never brings in accessories from the start, am sure we will have to wait a few months for those to land.
3. Camera does suck!! but then other than skype, why would I need it??

Now the Good
1. Its everything the ad's promise and a bit more... you are actually h...
READ MORE

I bought this rite when it was introduced.. And I feel great after using it fr days... T resolutions, color vividness and brightness of t tab are great.. dustproof helps me a lot as my work is on t construction site.. Camera is partially t same wen compared to other tabs and it lacks frm flash... The battery dnt last as iPad but though Sony has a solution, "stamina mode",which helps to mantain t battery while not in use... Multitouch has to be upgraded in their nxt upgrade..

Every tab has p...
READ MORE

The best tablet money can buy!!

Firstly, kudos to Flipkart's services. With the exception of 1 product (a Strontium Micro SD), all products that I have ordered so far have been immaculate, including this one, the Sony Xperia Z Tablet.

This has to be the best tablet available in the market. Really sleek design and premium finish. Even the plastic used feels premium! Most importantly, has got amazing battery life. I have never seen a tablet last 3 days on constant Wi-Fi use. I believe this is mostly due to the power saving f...
READ MORE

Better than ipad (for sure)

i think, the title would be enough !!!
The rubber finish is awesome!!!!!
It is very smooth in operation, after the 4.2.2 update. It beats Ipad on all grounds.

It is also way better than nexus 10.
and better than samsung cheap plastic
I think I have covered the only two contenders in its class.
READ MORE

Best of Sony combined with the best of Flipkart

Can't wait to write this review. This is an awesome product. Nothing bad about it, worth every penny. Georgous display & very responsive. Build quality is better than any other android tablet and on par with ipads. Also, this is currently the slimmest tablet in the world at this size. One brilliant piece of architecture this is.

Flipkart service was always good according to my past experiences. But this time Flipkart just wowed me and left me speechless with their service...
READ MORE

Lets get straight to the pros and cons:

Cons:
Battery life, though decent, could have been better.
Even with such high end software and specs, the interface tends to lag from time to time

Conclusion:
Its definitely worth it... there isn't an Android tablet out there so beautiful and thin as thi...
READ MORE

Got this wonderful gadget a week back. Till now, I am impressed with what sony has offered.

Flipkart as always did a Fab job of delivering the product well within the estimated time.

Thanks for making my experience so wonderful
READ MORE

1
0
Permalink
Report Abuse
+
All 44 reviews
Have doubts regarding this product?
Safe and Secure Payments.Easy returns.100% Authentic products.
You might be interested in

Keyboards
Min. 30% Off
Shop Now
Back to top