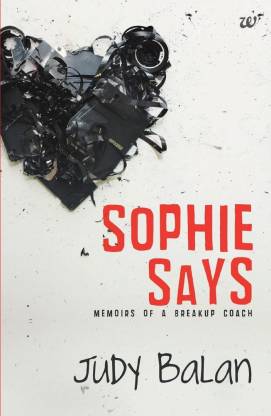 Get notified when this item comes back in stock.
Home
Books
Fiction Books
Romance Books

In Sophie Says, a romance comedy by Judy Balan, a self-professed “break-up coach” discovers that remaining single isn’t as easy as she claims.

Sophie Tilgum has had it with relationships. In thirty years, she’s faced all sorts of men, ranging from the stalkers and the pleaders to the liars and the cheaters. She’s tired of the singers and the let’s-get-married-after-three-dates guys. After a decade of handling long-term relationships, she’s given up on them all and decided to become “The Breakup Coach”. Her blog, Sophie Says, is rising in popularity, and she is constantly helping Single-Singles, those who are definitely meant to remain single all their lives. She doesn’t believe in commitment phobia. However, she’s going to discover that there’s something to a relationship after all. Her cousin’s marriage sparks off comments about her own single status and she’s forced to find a pretend-boyfriend for the ceremony. However, this guy is too hard to resist and things might not turn out as Sophie expects.

Judy Balan is an Indian comedy writer who dreams of writing for her very own English sitcom one day. She also writes blogs, plays, columns, screenplays and advertising copy – anything but poetry.

Witty and insightful: A must read

I waited and waited for this book to arrive. After reading Two Fates, I knew I was in for a treat. And I wasn't disappointed. Sophie Says is funnier, wittier, and you can really see how Judy has evolved as a writer. I would recommend this book to anyone who is or isn't in a relationship. I think I'm going to go read it again. Cheers!
READ MORE

nice book, but the book they gave me is quite old.
READ MORE

Fell for Judy's writing after reading her maiden novel "Two Fates". Judy didn't disappoint me in the second novel as well. Sophie says is peculiar, quirky & a wonderful evening read.
I am planning to read this book again :-)
READ MORE