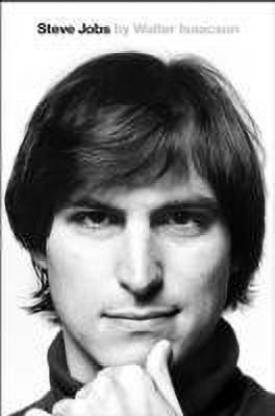 The book is a biography on Steve Jobs which was completed by Walter Isaacson after having conducted interviews with the legendary innovator. The author has even spoken people who knew Jobs and were close to him, whether it was professionally or personally.

The books talks about a man who is one of the greatest innovators of our time. Walter Isaacson had to collect information on Steve Jobs through forty interviews that were done within the span of two years. He also had to interview over a hundred people who knew Jobs like: family, friends, competitors, colleagues and adversaries. All of these people were encouraged to speak honestly and give their genuine opinions by Steve Jobs himself. The exclusive biography of the founder of Apple is a must read for anyone who admired Jobs and his work. The book was a best-seller across the world.

Walter Isaacson is an American writer and biographer. His biographies include that of Steve Jobs, Benjamin Franklin, Albert Einstein and Henry Kissinger. He is the CEO of the Aspen institute, and the Managing Editor at Time.

This book doesn't need a review. Its a biography.
And it shows how a great visionary and genius like Steve Jobs was only human, with all its failings.

Its worth your time if you love the work Steve did, OR even if you are a computer or technology enthusiast or even if you dont support Apple.
Just be open minded when you read this!
READ MORE

One of the most detailed biographies I've read

If you're a fan of Jobs or are just intrigued in finding out what made the man click, this book provides a brilliant insight into his life. Every phase of his life is described in detail and this books gives a real understanding of what a complex man Jobs truly was. You feel as if you're growing with Jobs as you read through the book. Written in mostly an impartial manner, the book highlights the good as well as the nasty aspects of Jobs character and brings to light the highs as well as lows...
READ MORE

excelent job from walter isaacson , a brief story abt life of the great visionary steve jobs, although steve jobs din`t made anything by himself he was just a visionary and a selfish person too (from my point of view) he dint gave a share in apple to his closest friend daniel kotke , when his atari boss gave him a job to redesign their popular game pong, jobs made all the work done by his friend steve wozniak but he only gave him the 50% of the basic pay jobs din`t tell wozniak anything abt t...
READ MORE