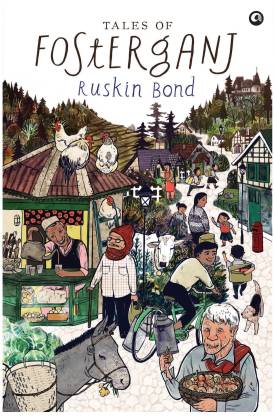 Tales of Fosterganj by Padma Shri and Padma Bhushan Ruskin Bond is a striking novel with delightful and unusual characters. Its wit and effortless humour is a compelling and captivating read.

The story is set in an imaginary suburb on the outskirts of Mussourie, the one made famous by his fabulous stories. Ruskin Bond’s graceful skill for story-telling is yet again brought out in this book. He makes simplicity the most desirable and the most beautiful virtue. With a subtle humour, the book unravels the myriad colours and faces of its characters in an unassuming elegance. A must read for Ruskin Bond’s fans. Like most of his books talking about hill stations and foothills of the great Himalayas, Tales of Fosterganj also paints pictures that evoke a spectrum of emotions.

Ruskin Bond was born Himachal Pradesh, India. He is the recipient of the most honorary Indian awards like the Padma Shri, Padma Bhushan, Sahitya Akademi Award and the Indian National Academy of Literature award. His contribution to children’s literature in India is specially recognized by the Indian Council for Child Education. His autobiography is Rain in the Mountains. Scenes from a Writer’s Life also talks about the young Ruskin. Some of his books are adapted as films and TV series, which have won awards. Garland of Memories, Rain in the Mountain-Notes from the Himalayas, A Face in the Dark and Other Hauntings, Vagrants in the Valley and Once upon a Monsoon Time are some of his other works.

a lovely read once again from the legend Mr. bond. simple,subtle and full of humor,no one will mind getting lost in the pages of Fosterganj. a true delight.
READ MORE

Just loved it. All bond fans don't miss this one as well for its a treat to yourself
READ MORE

You have to be mesmerised with the stories..
READ MORE