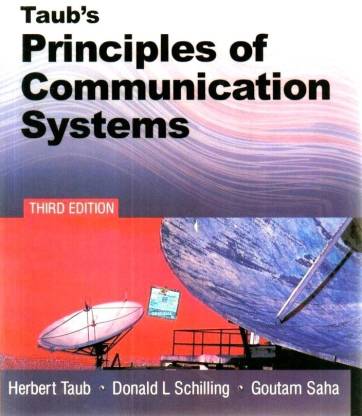 Get notified when this item comes back in stock.
Home
Books
Reference Books

Principles Of Communication Systems is a comprehensive text and leading authority in the field of the communication systems engineering.

Principles Of Communication Systems is a well respected reference text in the field of communication systems engineering. This text’s success is in part due to the manner in which the concepts are presented, its emphasis on mathematical treatment, and the novel way in which digital or analog communication is taught.

The text’s main objective is to encourage self study by way of illustrations and solved examples. The chapters in the text have been reorganized such that each chapter always begins with an introduction, which links the previous chapter, followed by figures and facts. Numerous objective self-test questions are included in each chapter which act as a self-check of the material presented. Then, each chapter concludes with a summary of the major points related to that topic.

Over 50 MATLAB-based examples enable students to test various parameters and the effects. The text also includes MATLAB-based SIMULINK models which will help students create a variety of student projects. Overall, the text includes over 100 solved examples, 600 problems for practice, and 250 objective questions.

The text has several salient features. The text proceeds with a discussion on angle modulation and the amplitude-modulation system. Four chapters are devoted to the topic of noise, with two more chapters examining the impact of noise on communication.

Principles Of Communication Systems is organized into 16 chapters. Some of the topics addressed in these chapters are Processes and Random Variables, Phase Locked Loops, Angle Modulation, and Signals and Spectra. The final chapter includes miscellaneous topics such as satellite, optical communication, telephone switching, and computer communications.

Goutam Saha is an Author and Associate Professor at the Indian Institute of Technology, in the Department of Electronics and Electrical Communication Engineering.

Saha completed his PhD at IIT-Kharagpur. Among his many achievements, Saha has numerous patents such as a lung sound analyzer and heart sound analyzer to his credit. Dr. Saha was in the Top 100 of DST Lockheed Martin India Innovation Growth Program in 2013. He is also a member of IEEE, USA. Saha currently resides in Kharagpur.

Herbert Taub is an Author and Professor.

He has authored numerous titles such as Millman's Pulse, Digital and Switching Waveforms, and Digital Integrated Electronics.

Taub has been a Kayser Distinguished Professor in the field of Electrical Engineering since 1969, at City College. He sits on the IEEE board of directors, and at one time was the President of the IEEE Communication Society. Currently, Taub is the Editor-in-chief at Communication magazine.

A good book to start

now this is the book many guys would have read in their under graduate course " Taub & Schiling" . the book is concise and reader friendly.
i have read the older one (with green cover). recently i borrowed this book from my library surprised by an additional author.

but really Mr Saha has done a good job. as i personally feel that reading theory will never work in a field like communication systems. unless u solve some problems. .For instance u read sampling theorem. it is just Fs >= 2 x F...
READ MORE