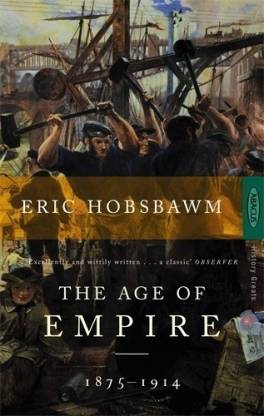 The Age of Empire is a historical account of the evolution of European economics, politics, arts, science and cultural life in the years between 1875 and 1914. Written by Eric Hobsbawm, this book presents the definitive look into the beginning of the fall of all the monarchies around the world.

Eric Hobsbawm continues his series into the late 19th century. He begins with the industrial revolution at its zenith, where human innovation begins to take flight, quite literally. He explains that the capitalist economy was recovering from the Panic of 1847, but the dominant British economy was being undermined by the German economy and American economy. There was peace in the world in this period, leading to widespread optimism that there would be peace for some more time to come. They were so horribly wrong. By the time the 20th century had dawned, the world was teetering towards a war that it would not forget for a long time to come: one that would engulf all of it into one chaotic battle, costing millions of lives – World War I.

Eric John Ernest Hobsbawm was a British Marxist historian known for his works on the rise of industrial capitalism, socialism, and nationalism. Dr. Hobsbawm studied at the University of Cambridge, obtaining his Ph.D. in history. He was awarded the Balzan Prize for his works on history. He has also written: The Invention of Tradition, How to Change the World: Tales of Marx and Marxism and Fractured Times: Culture and Society in the 20th Century.

NOT VERY USEFUL FOR CIVILSRVICES