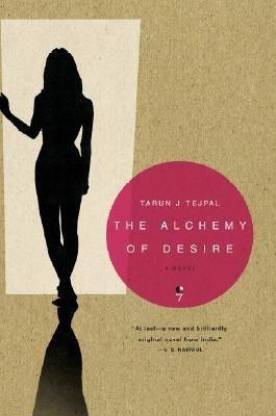 The Alchemy Of Desire tells the story of a married couple as they explore love and desire in their relationship with each other.

Tarun J. Tejpal, publisher and editor-in-chief of Tehelka, is a leading name in Indian journalism. In his debut novel, The Alchemy Of Desire, Tejpal explores the dichotomy of love and sexual desire in a story that is well known for the intensity of emotions portrayed.

It follows the story of a young, married couple, who are completely obsessed with each other, and even more so with sex. The husband, a struggling writer, works continuously on his breakthrough novel, stopping only to appease the burning passion of his wife. They buy a forsaken cottage on the foothills of Himalayas hoping to restore it and make it the symbol of their desire.

During the repairs, the husband stumbles upon the diaries of the previous owner, a glamorous American woman by the name of Catherine, and is immediately drawn to the story of her life. The memoirs of her passionate love affair awaken his insides to a new world and its impact on his relationship with his wife is both profound and palpable.

The Alchemy Of Desire has been translated into a number of major languages and was internationally hailed as a significant literary achievement for Indian writing in English. It was shortlisted for France’s Prix Femina and won the prestigious Le Prix Mille Pages award.

As the editor-in-chief of the leading weekly, Tehelka, Tejpal writes regularly on topical socio-political issues for the magazine. He has written three novels, The Alchemy Of Desire, Story Of My Assassins, and The Valley Of Masks.

His books are set in contemporary India and often explore the lives of the less affluent sections of society. They are held for their sensitive portrayal of social mores and basic human nature. As a journalist, he is known for covering news in a hard-hitting and uncompromising manner.

Tejpal was born in 1963. After graduating in Economics from Punjab University, he began his journalistic career with India Today magazine. He went on to found leading magazines like Outlook and Tehelka. In a career spanning nearly three decades, he has served as the editor of a number leading publications including India Today and the Indian Express Group. He is currently the editor-in-chief of Tehelka. He was listed by Business Week on its ‘India's 50 Most Powerful People’ list in 2009.

Alchemy of Desire is a slow, seductive but dark tale of passion and longing. Tarun Tejpal's writing has become an inspiration for me because he writes about each and every detail of whole scene with such intensity that you actually get transported to the place where everything is getting unfolded. I salute to the imagination and writing ability of the author. He truely makes you feel the whole aura of every character and setup.
READ MORE