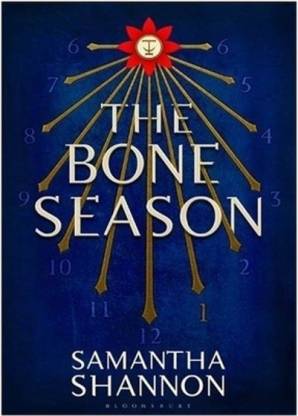 The first in a best-selling urban fantasy series by Samantha Shannon, The Bone Season tells the story of a clairvoyant girl who mines for information in the thoughts of others in Scion London, a dark underworld set in the dystopian near-future.

Paige Mahoney is a dreamwalker, and she is very good at it. In a world where clairvoyants are hunted, she is captured and taken to the city of Oxford, thought long erased to serve the Rephaim in their army. To escape their ranks, Paige will need to understand the man she must serve, a man as mysterious as his agenda.

Samantha Shannon is a British writer. A graduate of St Anne's College, Oxford, she specialized in Emily Dickinson and Principles of Film Criticism.

I first read The Bone Season over three years ago. It was sophomore year of high school, I had my Chemistry and Physics finals the next day, and I made the choice to read just a FEW chapters of this book during my break.

OF COURSE, ANY BOOKDRAGON WORTH HIS/ HER SALT KNOWS THAT A FEW CHAPTERS IN AN INCOMPREHENSIBLE TERM.

And so, instead of finishing my revision, I sped read this book, dying for more Paige and Warden Scenes and barely concentrating on the plot. I bought myself a copy of The M...
READ MORE

Talk about courage in a protagonist!! This one's way off the charts.

What I love about this book is that there is not a word in this book that's uncalled for. I don't believe in ghosts, that's reality. But this book can take you far away from that, as far away as your silver cord allows it to (Don't worry you'll understand once you've read it). The chapters are quite small and very visual, and at the end of each, you'll be drawn into the next, meaning you can't put it down once you've started. The language feels natural and hence easily understood. About the p...
READ MORE