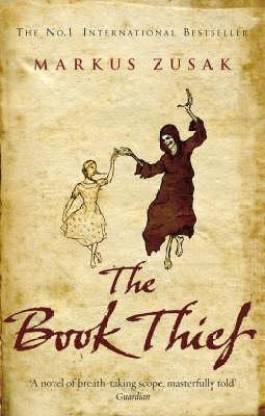 In Nazi Germany, a young girl whose parents have been whisked away to a concentration camp steals a book. Markus Zusak’s The Book Thief is her story, the story of how Death, the Hooded One, visits her.

During the Holocaust, the Angel of the Night, Death, also known as the Hooded One, is a very busy being. He is constantly having to whisk away Jews killed by the Nazis at their concentration camps. He encounters a young girl named Liesel, whose parents have been taken to one of the camps. Liesel lives with her foster parents, and her experiences during the war bring subtle changes in her. Death watches as Liesel steals a book, and he begins to follow her as she tries to find more to read in an attempt to escape the gloomy world she is a part of.

Markus Zusak is an Australian writer known for The Messenger and When Dogs Cry.

great job Flipkart! very timely delivery as shown in the app, nice packaging without any faults
other than that the book itself is very amazing the cover is quite good I haven't read it but can surely Say that it would be very good ☺️☺️
#satisfied#flipkart#amazing
READ MORE

This novel has the potential of changing the reader's thinking towards the world and its people ! I am completely moved after reading this piece of art by markus zusak ! Just so creative and awesome ! He has written something really unbelievable and beautiful . The sufferings of world...what is to be happy and sad ! He finds happiness in such unbeleivable things... this is one of my favourites...
just a classic , a must read novel for teens.
READ MORE

A Celebration Of Words

There are books(most of them) which after having read, find their places back to the shelf, to be lost in the midst of the growing dust, chucked into oblivion, perhaps for ages. And then there are the books that find a place in the readersâ?? heart owing to their inimitable quality. Books which urge the reader to heave them out of the shelf now and then, to remove any gathered dust. The Book Thief as you can guess has found its place, in the latter category. This book is truly a celebration...
READ MORE

The Book is awesome - content as in.
But the packaging from Flipkart is so disappointing. The book wasnt covered in bubblewrap or even protective covering. Just put inside a cardboard box of the wrong side. The entire book got dogeared. And, the front cover started peeling into 3 layerd within 2 days of using it.
Hoping for a better packaging and quality next time over.
READ MORE

I read the ebook version first. Then decided to go for the paperback to keep the book in my collection. It is an amazing novel written in lyrical voice. The grim tone of death as the narrator is appealing enough to keep you hooked till the last page. It is a thick book. But that's OK with me. I love thick books with slow narration. A must read for people who like poetic storytelling
READ MORE

It's just superb ! It's a super cool book by Markus Zusak.I simply love it
READ MORE

It is really hard to place this book among the established genres. There is a little of everything a good book, in the traditional sense, needs. But the book simply transcends beyond these elements and stands on its own.

The first element that captured my attention was the narration made by 'Death'. Marvel! He chooses to tell a story set during the holocaust period. One doesn't have to relate themselves to their historical scholarship to devour this gem. The story, holocaust or not, stands o...
READ MORE

The book was in perfect condition and nicely wrapped with a protective cover.
Won't say much about the book but it is a thick read.
I got this book for just Rs. 169 during the sale.
Not a pirated copy, definitely go for it.
READ MORE

THE BOOK THIEF MUST READ

The story takes you to the life of a girl named lisel who is grown by her foster parents and it describes the life the germans had to face under hitlers rule during world war 2. Just no words to say about the story book thief read it you will understand it .The author takes us deep into the story. A good book for those who have the love of reading.
- Review by (Allwin JV)
READ MORE

BOOK THIEF READ IT YOU WILL KNOW IT

In love with Liesel Meminger

This book is smartly written. Mr Zusak has beautifully utilized the 'colours'. The sufferings of common people, both Jews and 'good' Germans have been portrayed. All the characters are matured. One of the best Holocaust novels. However this could have been better. Still it's better than the movie of same title. Nobody is going to regret after reading it.

The binding quality of the book is average (as done in India) and paper quality is good.
READ MORE