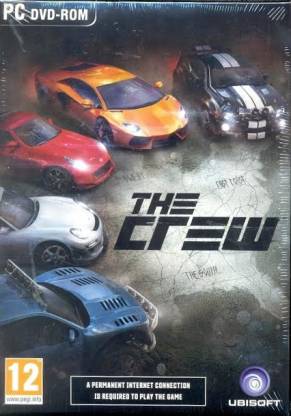 The Crew (for PC)

If you want to experience the frontier of virtual racing, here is your chance! Developed by Ivory Tower and Ubisoft Reflections and published by Ubisoft, The Crew is a single-player/multiplayer racing video game for the PC. Rated 12 by PEGI, this game offers the player a detailed open world environment that’s set in the United States of America; you can explore the many suburbs, downtown city streets, canyons, cornfields, hillsides, desert dunes and race tracks as and when you please. In total, it would take the player a total of 90 minutes to travel from coast to coast.

The single-player campaign offers 20 hours of gameplay and requires the player to infiltrate various criminal groups. Many mini-games called Skills have been set across the expanse of the entire map; these are triggered once a player drives his or her car through them. Make your very own crew of four racers and embark on missions such as escaping the cops or taking down a convoy with the help of your buddies. Furthermore, based on your preferences, you can now customize your cars with greater detail by collecting performance and cosmetic parts and utilizing the extensive tuning system.

The scores that players achieve in races will now be saved so that your friends can try and beat them, very similar to the Autolog feature that was included in the Need for Speed franchise. Up to 8 players can compete in the various kinds races that have been featured in The Crew. Julian Gerighty, the creative director of The Crew, mentioned that The Crew is more of a role-playing game with large-scale multiplayer elements.

Multi-player gaming is a pain in India because lack of good servers. Most games in India run Online on the servers of other countries like Singapore. This results in high ping rate which leads to us spawning into bad game lobbies.
The game is totally online and I did not find it fun at all not because the game is bad but because of connectivity issues. I am using a 4Mbps BSNL connection single-handedly with just my PC connected to the Internet. Still I am not satisfied with the online multipl...
READ MORE

The Best Racing Game that Exists !! Its More than Racing

Its got Awesome Graphics !! You can go to anywhere you can see accept the sea and sky. The gaming area covers the whole of America and playing in such a vast environment makes it more exciting. There are allot of cars which can be customised the way one likes wheather a circuit spec or dirt etc... Having played all the racing games till today i find this the best racing game. Buy it and you wont want to play any game except this.
READ MORE

I have ordered the crew pc games . they have given me the crew wild run but that's also great because I love car games so its fine but I want to say please give the right product .
READ MORE

The game is pretty good and fun to play......The missions are pretty challenging
Hard to handle the cars at first (I am used to nfs mostly)....but can be grasped easily
Pros
Does not require too much of a high speed internet(I was downloading while playing the game I have a downloading speed of 60kbps)
Cons
Requires constant internet connection
Very hard to buy all the cars due to low income source in game
READ MORE

first and for most compared to the latest NFS Rivals theres plenty of option and choice of cars and love the Spec system too that really helps in choosing the best suited car for different race types but in todays racers Car Physics is important which The Crew is absent of. It just sucks as u can ram into traffic or a tree at high speeds but still keep your car on the road or moving straight instead of crashing completely, the car doesn't slide much either. Also you cannot Tune the Performanc...
READ MORE

You'll have to work on Packaging because it was not that good packaging when i received Order 1886......Bt still....I loved the game....if you don't care minor glitches while playing online [Cuz there's no offline mode...you'll have to play online] But in PVP Battles you'll find some minor glitches and you won't be able to use it until your'e a psn member.
I expect if you can sell Playstation Network Membership cards cuz I trust in W.S Retail!
Good Job Guys!!!

2) Good control
Has a good steering control and adjustable also.

3)Free Roaming in US
Those will enjoy who loves free roaming.

With an open world setting and multitude of modes and versatility with a great engine that makes car handling as realistic as any racing simulator, the Crew just requires you to get online, gather friends and start owning the virtual US map.
READ MORE

This game is very fun to play and I have easily spent more than 24+ Hrs playing it.

The Good -
1) Car Selection is good and new are added regularly. They look really great too :)
2) World is HUGE and no Loading screens. Just take a RAID car and drive across the desert
3) Lots of players online and it is fun to complete the Missions with them.
4) Lots of Skills, Landmarks etc.

The Not so Good
1) Rubberbanding AI gets a bit annoying sometimes - the enemy AI becomes more aggressive when you ...
READ MORE

Need For Speed who!?

Ubisoft simply nailed it!
Full of pros if ur system meets the required config!
Awesome gameplay,graphics,story line,UI and so on.
Am playing in 2732x1536 resolution with DSR technology from NVIDIA.
So its buttery smooth..
There is just one con.
It requires a permanent internet connection and that also a good one!
Else you will get disconnected from the servers.
So guys go for it.. But first UPGRADE ur internet connection..
There are so many players in the game with which u can play Co-Op or c...
READ MORE

0
1
Permalink
Report Abuse
+
All 55 reviews
Questions and Answers
Q:does it require anything to download or simply install and play
A:Required to download of about 1GB... Waste !!
Atiqur Rahman
Certified Buyer
8
2
Report Abuse
Q:Can we play offline mode?
A:No we can't play this game offline, we need to stay online and a good connection for this game to play.
Manish Murmu
Certified Buyer
2
0
Report Abuse
Read other answers
Q:can i play this game without graphic card
A:nop
Akash KP
Certified Buyer
2
2
Report Abuse
Q:Can we play it with friends without Papua
A:Hi, Its an online game version requires internet. Thank You
GameBox
Flipkart Seller
0
0
Report Abuse
Q:Dual player option is there
A:Yes
NextWorldRetail
Flipkart Seller
0
0
Report Abuse
Read other answers
Q:Can i play this game without ps+?
A:Yes u can play
Anonymous
Certified Buyer
0
0
Report Abuse
Q:how to on it
A:insert the disc in xbox one. go to menu of my games, you will see The Crew icon. to install it will download and install the content around 60 GB from Microsoft cloud. after it completes..go Racing
Rajnish Kumar
Certified Buyer
0
0
Report Abuse
All questions+
Didn't get the right answer you were looking for
Product Description
Imagine a world, similar to World of Warcraft, where instead of having heroes and villains as your characters, you get to use some of the fastest and strongest super cars in the business. That is basically the Crew. Create a team, explore a highly expansive map, take down police cars and race with some of the best in the world.
Never Drive Alone

Join a world of car enthusiasts, where everyone is ready to either join your team or take it out. Jump in and out of different races and scenarios instantaneously so that you help your team complete challenges or take down a rival faction.

The entire United States is your map, covering thousands of miles, from city to suburb, county to county, coast to summit. Feel free to roam all over the country with no boundaries to restrict your car.

In this game, you have the choice to be one of six types of cars - Full Stock, Street, Dirt, Raid, Performance and Circuit. Each type has certain attributes that, when combined, can take down any team. Choose a team with different types of cars and see how well you take down the competition.

Choose from a number of cool missions that requires every inch of your skill. Choose from any of the seven types of games such as Go to, Collect, Get Away, Follow, Takedown, Outrun and Race.

In this game, you can choose to improve any of your core driving skills. Some of the skills include climbing, jumping, scrambling and slaloming. Practice these skills regularly and you will see yourself become one of the best out there.