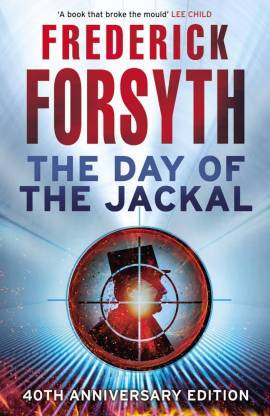 The Day of the Jackal (English, Paperback, Forsyth Frederick)

The Day of the Jackal  (English, Paperback, Forsyth Frederick)

The Day Of The Jackal is the story of how an unidentified assassin, called The Jackal, has been appointed to kill the President of France. With a determined detective giving chase, will The Jackal be able to complete his mission?

The Day Of The Jackal, originally published in 1971, is a thriller novel. The book revolves around an English assassin who is only known as The Jackal. He is unknown to any secret service agency anywhere in the world, and has been appointed by Colonel Marc Rodin, Operations Chief of the O. A. S., a French paramilitary organization, to kill the President of France, General de Gaulle.

Set in the spring of 1963, The Day Of The Jackal is divided into three parts. The first part, Anatomy of a Plot, explains how this cold and calculating assassin agrees to murder the most heavily guarded man on earth, for a sum of $500,000. Readers will learn about the meticulous preparations that The Jackal takes in order to fulfill his task. The protagonist gets himself a British passport under a false name, and goes to Belgium to buy specialized arms. The second part of The Day Of The Jackal, Anatomy of a Manhunt, shows how Detective Claude Lebel tries to establish the assassin’s identity.

The Jackal enters France, and prepares to kill the President. The last and third part, Anatomy of a Kill, provides details about the man-hunt that is conducted to catch the criminal. Will The Jackal get caught, or will France lose its President?

The Day Of The Jackal revolutionized the spy-thriller genre. The author had interviewed gun makers, bodyguards, forgers, and even an assassin while writing this novel. In 1972, the book won the Best Novel Edgar Award, and was listed on BBC's survey The Big Read in 2003.

Frederick Forsyth, born in 1938, is an English writer and political commentator.

He has also written The Veteran, The Fourth Protocol, The Cobra, The Dogs of War, Avenger, and The Fist of God.

The author studied at the University of Granada in Spain, and then joined the RAF as a jet fighter pilot. In 1961, Forsyth joined Reuters, and later became an assistant diplomatic correspondent for BBC in 1965. For the next two years, he was a war correspondent in Nigeria, after which he became a freelance reporter and author. In 2012, Forsyth was awarded the Cartier Diamond Dagger award by the Crime Writers Association. In his spare time, the author enjoys scuba diving and snorkeling.

If you are really looking for a thriller and suspense combo, go after this one.. it has the best mix of both.. Really loved reading it.. Kudos to the author who has taken great pangs for this marvelous creation..
READ MORE

One of the Best Ever

It's one of the finest thriller ever written. Its totally addictive until you finish it off. The novel will leave you awestruck. Each character has been designed to perfection, everything is elaborated precisely, and the story is breathtakingly fast !
READ MORE

WoW,, always loved Frederick's novels. Highly descriptive. It is so well written that one will get confused whether this based on a true story or not. Well, most of the characters that i have come across in his novels are true characters, description is so damm accurate and some portion is intelligently mixed with fiction, making it the best read. I am still scratching my head after i read 'The Odessa File', even in google i cant find a definative answer to whether the odessa file really exis...
READ MORE

This book is a super fast thriller. I had to finish the book in one breathe. The story has a massive twist at the end... lets just say go through the book and you will know yourself that you've read one of the best thrillers in the world ever..!
READ MORE

An exciting journey through suspense and politics. Loved every minute of reading this book. Cleverly paced and makes you travel through France's volatile political environment. One of the best works of Frederick Forsyth.
READ MORE

There are books that stay with you long after you have read them. THE DAY OF THE JACKAL is one such. I have read this book a few years ago, but having lost my old copy (and being an avid collector), i purchased it again. Reading it for the second time was as good as the first.

Now there is no point discussing the plot but for all FORSYTH fans out there- this is a must read. It's the master's best work and for readers new to Forsyth, i suggest you start with this book. You will become his fan...
READ MORE

Best in it's genre

BEFORE YOU READ IT, I would recommend all readers to read a little about the French-Algerian war. This would seriously help during the first few pages.

Coming to the book, Frederick Forsyth did a brilliant job. The research done for the book is deep, precise and amazing. Forsyth goes deep into the 1961 French.
You'll think it's just ordinary people trying to kill the President of France but it's not.
Forsyth appropriately describes the O.A.S and the politics related to the appointment of Pre...
READ MORE

Thrilling. Forsyth at his best!

Things that make this book absolutely a must read:
1. Based on a true story
2. Page turner, which will keep you hooked every step of the way
3. The lead character- the assassin- has such a perfect plan that you will find yourself rooting for him
4. Amazing climax
READ MORE

I was eagerly waiting to write on this for the last couple of weeks but decided to wait until I finish the book. So, as you can rightly guess, I finished it yesterday night, and phew! it was GOOD, really REALLY good. A thoroughly enjoyable story, superb narrative style of Forsyth, pin-point detailing, highly-paced and really witty and lovable choice of words. And what I liked most is its ending, just an appropriate ending this kind of tale needs, an ending that leaves you in thoughts, leaves ...
READ MORE

A must read for all thriller lovers

One of the best thrillers I've read till date!! The plot, presentation and detailing is amazing. Simply Un-put-down-able.

His writing has amazing details ... that's what I like most about this book specially !!
READ MORE

0
0
Permalink
Report Abuse
+
All 44 reviews
Have doubts regarding this product?
Safe and Secure Payments.Easy returns.100% Authentic products.
You might be interested in