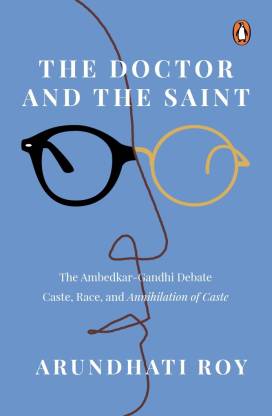 The Doctor and the Saint (English, Paperback, Roy Arundhati)

The Doctor and the Saint  (English, Paperback, Roy Arundhati)

Description
To best understand and address the inequality in India today, Arundhati Roy insists we must examine both the political development and influence of M.K. Gandhi and why B.R. Ambedkar's brilliant challenge to his near-divine status was suppressed by India's elite. In Roy's analysis, we see that Ambedkar's fight for justice was systematically sidelined in favor of policies that reinforced caste, resulting in the current nation of India: independent of British rule, globally powerful, and marked to this day by the caste system. This book situates Ambedkar's arguments in their vital historical context-namely, as an extended public political debate with Mohandas Gandhi. 'For more than half a century-throughout his adult life-[Gandhi's] pronouncements on the inherent qualities of black Africans, untouchables and the laboring classes remained consistently insulting,' writes Roy. 'His refusal to allow working-class people and untouchables to create their own political organizations and elect their own representatives remained consistent too.' In The Doctor and the Saint, Roy exposes some uncomfortable, controversial, and even surprising truths about the political thought and career of India's most famous and most revered figure. In doing so she makes the case for why Ambedkar's revolutionary intellectual achievements must be resurrected, not only in India but throughout the world.
Read More
Specifications
Book Details
Dimensions
Frequently Bought Together

I Wouldn't Suggest This Book. Rather I Would Ask You To Buy 'Annihilation Of Caste' By Dr. B.R. Ambedkar From NAVAYANA Publication. The Introduction Of This Very Book is 'The Doctor And The Saint' Itself. It's A Little Bit High in Price But Helps You A Complete Understand As It Adds The Lecture Of Dr. Ambedkar With Important Footnotes, The Ambedkar-Gandhi Debate And A Note On The Poona Pact By S. Anand Which Will Certainly Enrich Your Knowledge More On This Genre . I Bought This Book For A S...
READ MORE

A great book for any book lover especially for those who love to read stuff related to racism. I will suggest to read "annihilation of caste" before reading the book.
Overall, A great piece.
About Flipkart delivery service, I got it delivered 4 days before the estimated date.
Go for it.
READ MORE

Great book and full of data and knowledge
READ MORE

A Most Awaited Books UPSC Aspirates Must Buy To Clarify Your View Of Gandhi And Dr.Ambedkar
READ MORE

Great book from one of the best intellectuals in present times.
READ MORE

The ends of book were damaged & faulty with the bend. Further no book/reading mark .
READ MORE

Arundhati Roy is really a great author.
Changed the way we are taught to think about Gandhiji.
Dr. B. R. Ambedkar was indeed the gem of India .
READ MORE

Packaging is not good ..deliver the product after one day ..I had order 6 books in last month and they provided only 1 book mark.
READ MORE