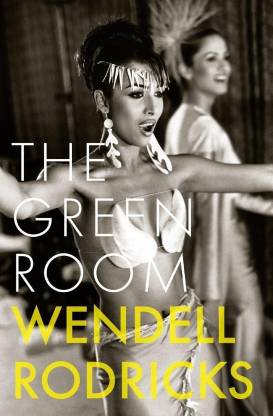 A witty, candid memoir of one of Indias most talented and best-known designers.

Epicurean, travel addict, voracious reader, art appreciator, astonishingly talented designerWendell Rodricks is a man who wears many hats. From growing up in a glorified Bombay chawl crowded with eccentrics, to building homes in Muscat, Istanbul and the French Riviera; from quenching childhood hunger pangs with water, to feasting on the canard au sang at La Tour DArgent in Paris; from falling in love with the man with whom he would sign a civil union, to putting his ancestral land of Goa firmly on the global fashion map; from being a novice in the hospitality industry, to exhibiting at Pret-a-Porter Salon de Paris and IGEDO, Dusseldorf; from designing clothes for his family, to dressing style icons such as Catherine Deneuve, Meg Ryan, Lisa Ray and Freida PintoWendells life has been an extraordinarily rich and exciting one.

Peppered with wry observations and startling insights, The Green Room is not just the story of one man but also of the evolution of the Indian fashion industry over twenty- five years. It is both a deeply personal journey and a window into the enchanting yet fickle world of the rich and the famous, the beautiful and the neurotic, the gossips and the bores.

Candid, irreverent and unfailingly entertaining, this is a memoir of the man who gave India minimalism, resort wear and eco-friendly clothing long before these words became fashionable. It is a sparkling piece of writing that tells the story of a fascinating life lived with unusual courage and flair.

‘[A] chronicle of a country in transition from home-grown to a fashion-conscious urbane society...eminently readable.’—Sathya Saran, Outlook
‘[Rodricks’s] prose is easy and refined… [He] has an eye for beauty, his ear to the ground and an elephant’s memory.’—Namrata Zakaria, The Indian Express
‘In the unfolding of Rodricks’s life you see the playout of India’s burgeoning fashion scene—from the first mavericks to media to retail.’—The Financial Express
‘[A] vivid description of the coming of age of the Indian fashion industry.’—Timeout
‘Wendell Rodricks’s personal arc and disciplined engagement with his craft make his autobiography an engrossing read.’—Tehelka
‘It is almost as if Rodricks is in your living room telling you his life story.’—The Sunday Standard
‘This is one journey worth exploring.’—The Sunday Guardian
‘[A] breathless spin around of a book.’—Forbes India
‘This one is a memoir that strikes a chord.’—Verve

About the Author
Wendell Rodricks spent his childhood in Bombay and started his working life in Muscat. He then moved to Los Angeles and Paris to study fashion design and couture. He returned to India in 1988 and quickly gained repute as a designer, working with renowned brands such as Garden Vareli, Lakme and De Beers. He established his own label in 1990 and moved base in 1993 to Colvale, Goa.

A pioneer in the world of Indian fashion, Wendell is considered one of the most influential designers in the country and has received international acclaim for his work. Wendell also writes about fashion and lectures on world costume history. His book on the history of Goan costume, Moda Goa, was published in 2012. He is passionate about art, music, literature, food, travel and Goas environment.