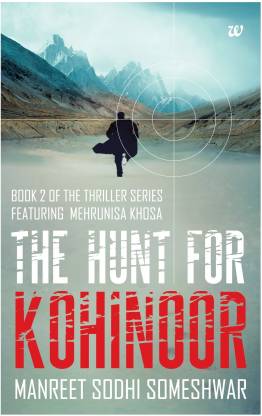 The Hunt For Kohinoor is a spine-chilling thriller about Mehrunisa, who is close to finding about her missing father, but instead finds herself battling deadly jihadis. Will she manage to come out of this alive? The book is the second book of Manreet’s thriller series.

The Hunt For Kohinoor is a nail-biting ninety-six hour hunt through one of the most dangerous terrain’s of the world. Mehrunisa is the protagonist of the novel, and one day on her way to work she receives a phone call that changes her world forever. She finally sees a way to find out about her missing father, but this takes her on the most desperate chase of her life. A pursuit puts her in the most dangerous of situations, pitting her against the deadliest jihadis, plotting a massive terror attack on India. The situation tests her mettle, teaches her the value of people around her, and that the price of love can lead to bloodied hands. The Hunt for Kohinoor starts from Kashmir to the snow-clad mountains of Hindukush. It is a gripping story with a even enthralling ending.

Manreet is an Indian writer. She is famous for her books, The Taj conspiracy and The Long Walk Home. She is an alumnus of the Indian Institute of Management- Kolkata. Her first book was Earning The Laundry Stripes, post which she took to writing extensively.

The Hunt For Kohinoor- Truly a delightful hunt

I was a huge fan of "The Taj Conspiracy", So I pre-ordered "The Hunt For Kohinoor". The Book is an absolute page turner, with timely twists and turns. The characters in the book were wonderfully described and portrayed, give it a real life feeling.

A very Innovative story, In depth researching about the places and very minute detailing about each and every thing has made the book very inquisitive to read further.

Overall, A must read book and definitely lived to my expectations after "The...
READ MORE

Mehr is my heroine!

I pre-ordered the book and its arrival was all I had been anticipating. After reading the Taj Conspiracy I was wondering if Mehr could get involved in anything thrilling again. But the Hunt for Kohinoor weaved that in beautifully. The book is exciting because it is based in current day India but helps understand aspects of the deep history specially in the Indo-Pak region. No author has been able to present a thrillers in one of the most explosive region. Surprising but encouraging to learn ...
READ MORE

A Scintillating 96 hour hunt of Drama, Suspense and Adventure.

I picked up the book reading its title "The Hunt For Kohinoor"-Seemed different and interesting and must say the book fulfilled every bit of my expectations.

A total page turner, the impersonation of characters and events in the book were fantastic and totally visualistic & the quality of writing was fabulous.

Considering that Manreet Sodhi Someshwar's "The Taj Conspiracy" was a critically commended and bestselling novel, one would think that she would use the same formula for the "Hunt for Kohinoor", the second in the trilogy. Instead, I was left pleasantly surprised by the conception and execution of the plot of her new racy thriller.
First things first, it's an absolute page turner, and I finished it in a single night. Even though it's evidence that years of research have gone into creating thi...
READ MORE

I read a few sample pages...the book is another glamour bought forward by money, which is reflective through the author introduction content. Just a wast of time and seemingly no great effort have been put to make it class...people supporting this book need to read classic literature...at least once in their life course..
READ MORE

Mark of a perfectionist!!

I am a huge fan of the prequel “Taj Conspiracy” and was waiting eagerly for the new book. Manreet has created really strong characters in this book and I loved the way she has kept them so real. In a plot like this, it is very easy to get carried away and make the lead character do a lone gunslinger act. She made the characters bleed, break bones and curse the weather. This book has every component of a thriller movie, without making it a larger than life “Hero rescuing heroine” story line.

I became fan of the author when I read The Taj Conspiracy. A gifted author, well said by the legendary Khushwant Singh. The plot created and presented is in such a way that you will scratch your heads for a while that how can one be so flawless. It requires patience to write such kind of a book. A detailed research and giving it time is crucial for this work. First of its kind where you have a female protagonist in a thriller. I would say a great work, heart pacing 96 hours they were. You wil...
READ MORE

I became a huge fan of Manreet's writing since I read 'The Taj Conspiracy'. So I was really looking forward to reading 'The Hunt for Kohinoor', and it turned out to be an absolute page turner. The edgy thriller keeps you glued through the snow capped Himalayan mountains, Kabul, Lahore- Islamabad GT Road. Author's love for the history of the Af Pak region shines through the book, makes you appreciate hours of research gone into it.

I loved the strong yet subdued Mehrunissa in The Taj Conspir...
READ MORE

An impending attack on the Indian soil, a dead Pakistani President and an important document on the loose..RAW chief Jag Mishra has 96 hours to select the right team, pull the right levers. Will the trio of art historian Mehrunisa, RAW officer Raghav and CBI Agent R.P.Singh be able to resolve the murders.

An action packed saga in Dan Brown style. Thunderous start, slow midriff but a good thriller, few chapters down the line. This one will take you through the border town of India, terrains ...
READ MORE

The Hunt For Kohinoor By Manreet Sodhi Someshwar - A Book Review

This 425 paged novel is Manreet’s fourth book and second in the Mehrunisa Khosa series. The first part, The Taj Conspiracy, was critically acclaimed. Unfortunately I didn’t review it or read it but yes, they were pretty good (from what I could gather from the opinion of the people whom I know who have read it). The basic story is that Manreet creates an interesting character who is an art and history expert who ends up helping Indian intelligence agencies crack codes which are based on histor...
READ MORE

0
0
Permalink
Report Abuse
+
All 19 reviews
Have doubts regarding this product?
Safe and Secure Payments.Easy returns.100% Authentic products.
You might be interested in