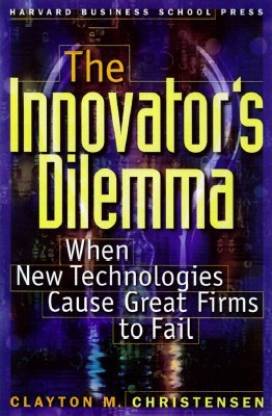 Sold Out
This item is currently out of stock
Author
Christensen Clayton M.
Read More
Highlights

The Innovator’s Dilemma is a seminal work on disruptive innovation and Christensen garnered accolades worthy of this book’s investigation into the study of innovation in business enterprises across completely disparate industries.

The Innovator’s Dilemma brought to the fore the role of innovation and technologies in a firm’s standing across a trajectory of time spanning the future. The book succeeds in demystifying the causes behind exceptional companies that did everything right and yet managed to lose out on market share. These companies used aggressively competitive strategies, paid heed to their consumer base and invested in new technologies. However, what led to them losing their dominance over the market?

Christensen makes a curious albeit truthful accusation that businesses that follow good practices can weaken due to the customer not wanting the particular product. The innovative patterns across a number of industries have been gauged by Christensen to provide a more detailed argument for this case.

The truth being firms often withhold a breakthrough innovation from their consumer base due to the dismissals garnered by a current target group. This is essentially what is called as innovator’s dilemma. However these consumers are sure to understand the usage of the higher technological products and in terms of long term growth, there is success to be had in taking this risk albeit losing out on a portion of the current base.

Making the use of diverse and interesting examples across the computer industry, milkshakes and steel minimills, Christensen makes his case with definitive stance and a sturdy premise.

The bold concept sought by Christensen in The Innovator’s Dilemma was published in 1997 and is held in high regard across academic and business circles. The book went on to win the Global Business Book award for best book of the year in business. It’s success also led to a number of follow up books by Christensen and also the book was reprinted several times.

Clayton M. Christensen is a Professor at Harvard Business School and an Author.

He is the bestselling author of the series of Innovator’s dilemma books. These books include The Innovator's Prescription, Seeing What's Next: Using The Theories Of Innovation To Predict Industry Change, The Power of Everyday Missionaries and The Innovator’s Solution among others.

He was born in Salt Lake City, Utah and holds a Bachelor’s degree from Brigham Young University. He received his M.Phil. from Oxford where he pursued Applied Econometrics and Economics of the less developed countries and as a Rhodes Scholar. He went on to complete his DBA and MBA from Harvard Business School. He worked in the Boston Consulting Group for a while before becoming a faculty member at Harvard Business School. He is a co-founder at Innosight and serves on the Board of Directors of Tata Consultancy Services. In 2011, he was honored as the world’s most influential business thinker in the Thinkers50 ranking. He is also a prolific contributor of articles related to the domain of business processes and has been five time recipient of the McKinsey Award for best article in the Harvard Business Review.

Really worth the hype! A must read!
READ MORE

A very noble thought presented cogently. This is a must read for anyone aspiring to succeed in business world
READ MORE