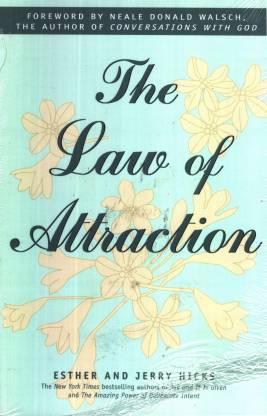 The Law of Attraction is a book that presents you with the basic teachings of 'Abraham', the name of a group of spiritual teachers. This book will show you how the powerful Law of the Universe, whether it is wanted or unwanted, brings everything in the universe, to us. This is called the Law of Attraction.

The Law of Attraction says that "that which is like unto itself, is drawn". This is the same concept that has brought about sayings like “Like attracts like” and “Birds of a feather flock together”. It is often believed that a belief is only a thought that keeps running in our head. Though many of the greatest teachers have mentioned the Law of Attraction, it has not been explained clearly. Therefore, many do not understand it. This book, by authors Esther and Jerry Hicks, gives readers a clear understanding of this powerful law. You will learn of the many omnipresent laws that are present in our universe and these laws can be used to our advantage if we want. With this book you can have or do anything you want if you think of it or work towards it.

Esther Hicks and Henry Hicks have co-authored nine books and have presented many workshops on the Law of Attraction. According to Esther, non-physical entities called 'Abraham' speak to her and her teachings, also called the Abraham Hicks teachings, are based on this experience.

The Law Of Attraction - Jerry Esther And Hicks

The Law of attraction is highly influential

This book is one of the very few good books writted on the subject of Law of Attraction, Law of Balance. Difficult to digest the contents but power thoughts. Some of the cases, i have seen this law works practically. I was slightly uncomfortable with the sequence of chapters and contents to begin with however, later found that there is a clear flow of the concept from one end to the other. One should not let his previous experiences & Logics while reading to enjoy the teachings of Abraham (a...
READ MORE

If you read and follow the content of this book, you don't have to go in search of any other material to understand The Law of Attraction which is constantly working in every bodies life.Read the book.Follow it.And be a creator of your own happy life.
READ MORE

This is the real deal. It changed my life. I'd been looking for answers for some time now, and it was fascinating to look back and see exactly how I got what I asked for. This book is a must read for anyone who wants to find the meaning in their lives. Questions that religion can not answer for us at this stage.
READ MORE

It's completely useless!! I mean it . Any Indian spiritual books can serve the same purpose in meaningful way than this book does!!!
READ MORE

Excellent book, this book cleared my all doubts regarding with the working of law of attraction.
READ MORE