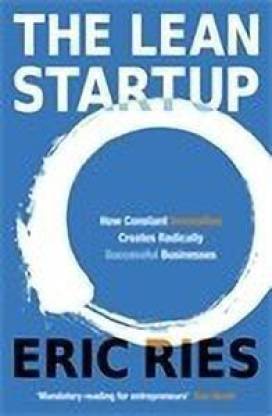 This Eric Ries bestseller is an elaboration of his famous business concept called Lean Startup. The Lean Startup: How Constant Innovation Creates Radically Successful Businesses, like the hypothesis, intends to revolutionize ways in which new companies are built and their businesses function.

The world witnesses a number of people zealously starting their own businesses everyday. Some of them are even backed by the greatest ideas and commendable expertise. But in spite of such enthusiasts putting their sweat and blood into their dream projects, the world also witnesses everyday, a mighty big fraction of such businesses falling apart. What goes wrong in so many cases and what could save such fresh ventures is quite a challenging question. To answer this and to provide a safety net for all those determined to make their own startups work, Eric Ries writes this book, The Lean Startup: How Constant Innovation Creates Radically Successful Businesses.

Inspired by the Japanese and their Lean Manufacturing concept, Ries coined this ingenious business concept in 2011. It gradually became a movement in itself and is now recognized as a modern and scientific approach to build lucrative new businesses and equip them for lasting success. In this book, Ries brings together all the valuable insights he gained from launching and working with several startups himself.

The elementary philosophy presented in the book encourages entrepreneurs to eliminate steps and processes that do not add value to their system or clients. It introduces innovative ideas such as Validated Learning, Iterative Product Releases, Minimum Viable Product, and Continuous Deployment. Besides analyzing the reasons for premature failure of startups, it also examines ways in which new companies can considerably benefit from Validated Learning and cut down on the huge initial investments.

Ries also emphasizes on making companies capital efficient and enabling effective channelization of human creativity. He writes about getting rid of expensive overheads and fancy metrics in order to better focus on intuitively designing and launching products that customers really need. He even points out the importance of identifying and fostering creative business habits that contribute to the success of any business. The book unfolds the ways to entrepreneurial success that lie above and beyond lengthy business plans and boardroom meetings.

Eric Ries is an entrepreneur and a business writer from the United States of America.

He is also the author of Black Art Of Java Game Programming.

Born in 1979, Ries went to Yale University where he studied computer science and completed his B.S. He co-founded Catalyst Recruiting while in college. Later, he went on to work with There, Inc. and later started IMVU Inc. Ries was named among the Best Young Entrepreneurs by Bloomberg Businessweek. His articles, blogs and business writings are featured in The Wall Street Journal, CNBC, The New York Times, Forbes, and other reputed publications. He also conducts conferences and workshops in different cities on the Lean Startup philosophy.

This book is moreover outdated and the examples companies or startups r not in the market right now. So their ideas and suggestions r not fit for the current startup world. Only thing they catch the good titles and layouts to impress us. Seriously outdated and not for fit as per my opinion.
READ MORE

Contentwise book is excellent. Whosoever want to get inspired and manage there start ups much read it. About, aesthetic look and papers are not good quality, seems more like copied from book.Actually, amount paid for paper quality too. Not satisfied with paper quality.
READ MORE

Must Read for Entrepreneurs

This is a must read book for every budding entrepreneur especially in the technology field. It is difficult to find a formula which can ensure success of a start-up but principles like Minimum Viable Product(MVP) and Innovation Accounting explained in this book can really help in taking better decisions.
READ MORE

Nice book if you have or planning startup

- Came to know about this book via one of my friend
- It nice book you learn some good facts
- Just grab it and read
- You will love it ;)
READ MORE

A must read for any entrepreneur and for anyone who likes the idea of "innovation". A little bit of extra thinking on the topics of this book can even help you deal with some basic decision making.
(Although not advisable to read with that idea alone.)
You want to start a business sometime in the future I recommend you this book.

Every startup entrepreneur must read this...love this book
READ MORE

The reader embarks on a scientific journey to explore the right 'pivots' for business. Very thoughtful but may seem a little theoritical to youngsters wanting to start their own business.

The book did a good job of introducing certain concepts such as MVP and concepts from Lean Manufacturing. Most of the examples covered in the book are from the software/web startup scene. How the concepts introduced in the book, when applied to certain core engineering fields are any different from existing techniques is still not very clear. The book does not intend to give answers to any critical questions that startups face, just tools they can use. That way, the book has not failed on its...
READ MORE

book is very good for entrepreneurs. words are little bit difficult to other books. It includes real entrepreneurial grind take your time and read this 🤩
READ MORE