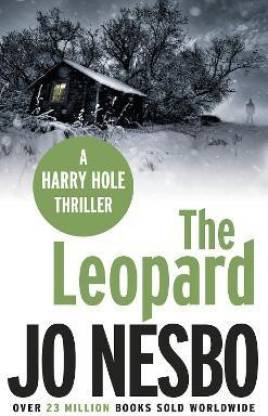 The Leopard is a crime fiction novel set in a wintery Norway, and is about a killer as ruthless and stealthy as a leopard, chased by a detective who is just as intelligent as melancholic. This book is a display of human relationships and what can become of them.

The Leopard is a sequel to one of Nesbo’s books which was published in 2007, titled The Snowman. The events of this book weathered detective Harry Hole and compelled him to flee to Hong Kong. In the present book, the gorgeous police officer Kaja Solness convinces Harry to return to Oslo, and so the story kickstarts.

Harry’s task is to hunt a gruesome serial killer. At first, this terrible murderer seems to target just women but then the body of a man is also found. In order to help him trace the killer’s background, Harry seeks help from his former partner Katrina Bratt. The ambitious Mikael Bellman is also a part of the plot as the man who wants the case to be under his jurisdiction and is thoroughly hostile towards Harry. Also, while working together, Harry and Kaja get involved in a love affair.

What brings Harry back to Oslo? Are the killings really as random as they seem? What is in store for Kaja and Harry? As the scenery shifts from Hong Kong to Oslo to Congo, new characters have a role to play, and the clock ticks faster and faster, the plot becomes more brutal, complicated, and dramatic.

The eighth novel featuring Harry Hole, this book was originally published in Norwegian in 2009, and was translated into English by Don Bartlett. Extremely violent, intricate in its storyline and full of surprises, The Leopard is a read for the brave-hearted who can endure unthinkable cruelty and cold-blooded murders for almost the entire length of the book.

Born on the 29th of March, 1960, Jo Nesbo is an author, economist, and musician. Before he became a full-time writer, Nesbo worked as a journalist and a stockbroker too.

Apart from this book, Nesbo’s other writings include The Headhunters, The Redbreast, Phantom, Nemesis, The Cockroaches, Balkan Voices, Doctor Proctor’s Fart Powder, The Bat, The Devil’s Star, and The White Hotel.

His books revolve around the themes of mystery and crime. His favourite writers include Ernest Hemingway, Vladimir Nabokov, and Frank Miller. He has received The Norwegian Booksellers Prize and The Riverton Prize, amongst other awards.

Nesbo studied at the Norwegian School of Economics. He is the vocalist for Di Derre, a Norwegian rock band, and is also interested in football and rock climbing. He resides in Oslo, Norway.

i was looking for a thriller from quite some tim to read and i've been reading some very good reviews about Jo Nesbo n one Mr Harry Hole. The novel has all the elements for a classical thriller and will keep you guessing till the very end. if you have not read snowman you might want to read it first and then come to this novel as lot of spoilers r there for snowman, i didn't read it either though. All in all a very good thriller novel to keep u glued till the last page
READ MORE

The Leopard by Jo Nesbo

A terrific murder mystery. A page turner par excellence. Set in icy cool climes this thriller will will make you sweat. Insp. Harry Hole is an unforgettable character, battling his own demons, departmental politics and the guiles of a maniac in his inimitable style. Jo Nesbo is a master.
READ MORE

It's an awesome book to read.... Jo Nesbo can give you as dark as you can ask for in a serial killer....
All the Reachers's, Rapp's fan out there you would love to read it....

As good as the Jo Nesbo's Phantom and Police......