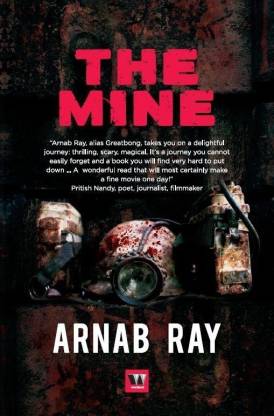 The Mine  (English, Paperback, Ray Arnab)

What happens when the evil lurking within men is brought out for the world to see?

Is the Devil just a façade created to cover the will of God?

These are some of the questions that Arnab Ray throws up through his novel, The Mine. The story falls under the genre of horror fiction and is tailored for those with a penchant for the eerie.

Through The Mine, Arnab Ray describes the terrifying experiences of a group of miners who are employed at an ancient site of worship. They starts experiencing nightmares when darkness falls, and during the day, the carvings on the underground dome drive them insane, albeit slowly. An investigation is launched with a group of experts when things get out of hand, and what they discover next sets the tone for a spine chilling journey, one that they need to get out of - alive.

The Mine was positively received by critics upon its release and Pritish Nandy was present during its launch.

About the Author
Arnab Ray, popularly known as Greatbong in the virtual sphere, is one of the well known bloggers in India. He takes sarcastic digs at Indian Politics, society and the Indian film Industry in his blog Random Thoughts of a Demented Mind.

May I Hebb Your Attention Pliss was his maiden book, and it was launched in 2010. Ray has also written for other media agencies like Outlook Magazine, Live Mint and Washington Post.

In a noticeable shift from his generally humorous style of writing, Ray has incorporated an element of mystery and intrigue while writing The Mine. His tone is pacy through the course of this book.

Please take this as my opinion and not review of Arnab Ray’s The Mine. Yours truly has read some books in his life. Though, he was an avid blogger, he isn’t so now. Therefore, you can safely consider him out of the league. Had I being so at the moment, I would have definitely written a page-and-half of what I thought of the Great Bong’s latest book.

Before I do that, a small note that may serve as a disclaimer.

I had been following the Great Bong blog since 2005-...
READ MORE

I have been wondering for a long time why in India, people do not write horror. Either horror is women with open hair, clad in white saree, carrying a candle or its full of weird creatures like owls and cats and funny-looking spirits. While, these can be categorized as horror, they dont really send a chill through your body. They rather tingle the funny bone.

When I started reading The Mine, I expected all this and more because the author is Indian. But I was pleasantly surprised. And I am ...
READ MORE

It's a nice book which keeps you hooked on to every passing pages.I usually take some time to finish any book ,this was for the first time i wanted to finish on the same day even though i had to take a leave from office. i Enjoyed the End ... 3 cheers to the author... I feel the title is very much appropriate to the mentioned characters
READ MORE

The author is reknowned for his humour pieces, but The Mine proves that Arnab Ray has more up his arsenal. This relentlessly dark novel is unapologetic and confident of the path it takes through its pages. You would still be under a spell of its intensity after finishing the book.
Without any spoilers, i can safely say that this is a special piece of work, and seems to be very close to the author's heart.
READ MORE

I have been following Arnab for years now at greatbong.net and love reading his narratives. Just loved his first book May I hebb your attention pliss. So when I picked up this book my expectations were that of a satire filled with humorous sarcasm and witty observations that I have observed in Arnab's narratives over the years.
But the book had none of it. Am I disappointed. Absolutely not. I am rather delighted to have read this chilling horror story. As Pritish Nandy on the cover suggested,...
READ MORE

THANKS FOR THE REVIEWS

i read about only 140 pages in the book but i feel that the book is really great . the book really rockz especially the part where they are trapped and will be breathing GX . READING ALL THE REVIEWS , AM EVEN MORE CURIOUS TO READ THE FULL BOOK BEORE TODAYS NOON . THUMS UP FOR ARNAB RAY . THANKS FOR GIVING US A FINE BOOK LIKE THIS . U ROCK MAN !!
READ MORE

Arnab Ray's The Mine' is India's Answer to Sidney Sheldon!

I can honestly say that I am very proud to have what I think is India's answer to Sidney Sheldon among my friends! Arnab is a literary genius, blending complex layers of psychology, philosophy, the thin line between moral/immorality, faith/love, life/death with a trace of his humour all beautifully interspersed into one thrilling and compelling novel.
If you love a good crime thriller- read this!!
READ MORE

I bought this book because of the reviews I read on flipkart..but never expected such a thrilling book!!!While reading the book i was wondering about the climax..But whatever things i have imagined to be the climax of 'The mine', never thought the book will have such a climax!!Still I have a lot of unanswered questions about the story..So just after writing this review I am going to start reading 'The mine' again... :)

Arnab Ray's "The Mine" stands head and shoulders above anything that has been written in the Indian English literature popular sphere. Finally, something that caters to mature audiences who have grown up reading proper English as opposed to the poorly-written juvenile crap that litters the store-shelves nowadays.

Having said that, "The Mine" is a difficult read, chronicling as it does the very worst of human nature; not exactly positive feel-good and I am thankful for that. It is provocativ...
READ MORE

Almost spell-bounding writing style. Was very much thrilled till the very end. The way each and every minute details are given and how many things are revealed at time is just not the Indian style of writing. One finds oneself attached to the character. But the end leads to some disappointment. Some questions remained unanswered till last. What was the mine for and why they were chosen, how did that temple came into existence are some of them. Other than that, a great book.
As for flipkart, I...
READ MORE

2
0
Permalink
Report Abuse
+
All 139 reviews
Have doubts regarding this product?
Safe and Secure Payments.Easy returns.100% Authentic products.
You might be interested in