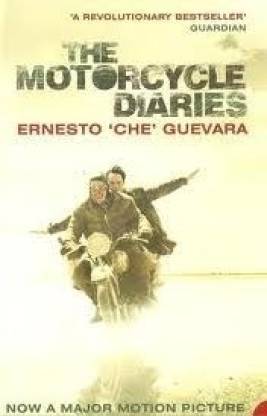 The Motorcycle Diaries is a collection of memoirs by Ernesto Che Guevara.

In this book, the 23 year old Ernesto Guevara reveals his experiences and adventures as he travels across a continent on a motorcycle. He makes important observations on life and humanity, forging the emotions and memories that would one day inspire him to take on another name, one that forced humanity to admit awe and inspiration, the name of a martyr, the synonym of the world revolutionary, the title of “el Che”. This book is one of Che Guevara’s most lucid and revealing memoirs and an important classic on revolution and the state of affairs in South America in the 20th Century.

Ernesto Che Guevara was an Argentine Marxist Revolutionary, physician, author, guerilla leader, military theorist and tactician known for his role in the Cuban Revolution. He is considered to be an icon of counterculture, rebellion and his visage has become a widely recognized insignia in popular culture.

"Che" has been the face of an armed revolution. The book will blow you away with the honest writing and extremely thrilling account.

One note of caution, the book is not an easy read mainly bcoz we are not that well versed with South American places, culture and other local things. So, you'll have to keep goin to wikipedia to really understand and enjoy the book. Otherwise, you might find the book a bore simply bcoz you will find it hard to understand.

And one final thing, there is a very p...
READ MORE

I was concerned about the quality of the paper and print of the book, since it is priced only ~200. But the book, now in my hand amazes me, very good quality of print. Additionally the photos of the expedition is given in the mid-section of the book, which is quite fascinating. This book is lucid and filled with expressions and emotions. The description of the places and the people are vivid and each character has a distinct spotlight, which is optimum and refreshing.
READ MORE

Che's 'Motorcycle diaries' , a collection of notes he had written during his Journey through his country , clearly illustrates the coming of age of a man. The man who would later go on to lead a revolution in a foreign country was born through these pages, these experiences. A must read if you want to know the story of the Argentinian medical student , 'Ernesto Guevara' turning into the Cuban revolutionary 'Che'!
READ MORE

The story brings out the adventure ride in South America and it provides many adventurous moments which are provides a real interest in reading the book. It also makes feel to drive bike and enjoy the fun of it.
READ MORE

These concise notes give us an intriguing insight of Che's perception which is radical. The way he sees things and his charisma made him "Che Guevara".
READ MORE

It's a fantastic book.Che was a medical student then.He went for a tour with one of his friend. With a motorcycle they travelled the entire South America.It is a book of earlier life of our beloved leader Che Guevara.A revolutionary best seller.
READ MORE

I have used this product and I really liked the way in which Guevara has written the experiences during his motorcycle visit. Also, the translation( the actual book was written in Spanish) is done precisely and neatly which indubitably attracts the reader while reading through pages. It will surely enlighten you from inside and I bet you'll have fun reading it. Please go for it! I am damn sure that you'll not regret anything after reading.
The book reached on time as usual. The print quali...
READ MORE

Amazing book. Takes you into a magical land and magical lives. A summary of what all one could do.
READ MORE

a prologue to a great man's journey. it's a journey changing people for good.. nicely written.. some parts/paragraphs of the book are worth reading from time to time...
READ MORE

I got this book with in 4 days from flipkart. The book contain awesome pictures of Che Guevara, taken in his journey throughout South Africa. I really wondered how it is possible for a man to make a journey in motorcycle to the entire continent. Later I understood that it is possible for men those who having burning spirit in their hearts. Che was a first man among those men. Love u Che and I really thankful for this book to flipkart.
READ MORE