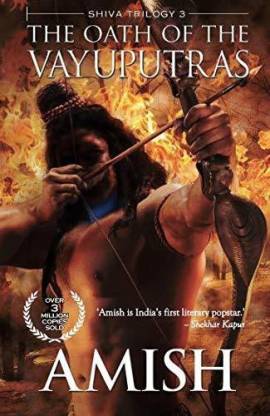 The Oath of The Vayuputras (English, Paperback, Tripathi Amish)

The Oath of The Vayuputras  (English, Paperback, Tripathi Amish)

India’s own super hero is finally here. Shiva has risen yet again to destroy the evildoers. The last of the Shiva Trilogy, this book promises to keep the readers gripped while the great warrior discovers who his true enemies are and gives it his all to destroy them.

The Oath of the Vayuputras is the final book of the Shiva Trilogy. In the earlier books of the trilogy, Shiva finds out that the Nagas are not his enemies and joins hands with them to reach the root of all evil. This book will have answers to ‘the Neelkanth’s’ questions about his fate, the choices he made previously and karma.

Further, in the concluding book of the trilogy, Shiva reaches Panchavati, the capital of Naga where he will come face to face with his greatest enemy. Will he win the battle over his wicked enemies, who are out to destroy him and his legacy?

The Oath of the Vayuputras will also reveal the reason of Shiva’s close friend Brahaspati’s disappearance and reappearance at the end of the second book, The Secret of the Nagas. Further the relationship between Daksha, the king of Meluha and the mysterious temple priests will also be exposed in this last part of the trilogy. Shiva seeks helps from the Vayuputras in the quest to conquer all evil.

The great warrior will encounter the real intentions of some characters he deemed to be close to him. Some new characters will add that extra vitality to the entire plot, especially Shiva’s greatest enemy whose name sends shivers down the spines of many great warriors.

An interesting journey of a warrior who is turned into a God by his followers because of his deeds and war against the evil, this book is sure to have its readers’ full attention. A good read which will make one reflect on their actions, this book like the two earlier books of the trilogy focuses on philosophy, religion and the never ending battle between the good and the evil.

Amish Tripathi, is an author who gave up his banking job to live his dream of becoming a writer. He is an IIM (Kolkata) graduate and worked for 14 years in the financial services industry. He has penned down three books as part of the Shiva Trilogy 3, which have received raving reviews and critical appreciation. His style of writing is fresh and has given birth to a new era of literature in India. With philosophy, religion, karma and myth as his main areas of focus, Amish has weaved his plots around them and conquered the hearts of many readers with his riveting ideas. Amish lives with his wife Preethi and son Neel in Mumbai. As is evident from his books, Amish has a passion for religion, philosophy, mythology and history. 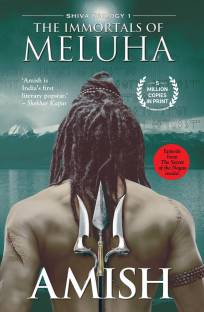 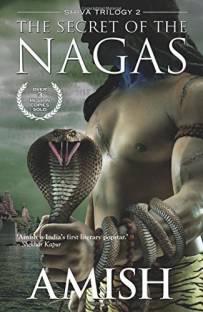 Interesting End to the Shiva Trilogy

At nearly 600 pages, The Oath of the Vayuputras is a massive book. Yet it has a good flow, which enables readers to finish it quite soon. I do not wish to reveal too much of the plot (although some other reviewers have already done that here!), but as the blurb says, Shiva is preparing his forces to battle the Evil, and at one desperate point, turns to the tribe of the Vayuputras, who help him defeat the Evil.

It's the classic Good vs Evil tale, with the author trying to pack in as many det...
READ MORE

Powerful End to The Shiva Trilogy

Amish has taken us on a beautiful visual journey with the Siva Trilogy and the third and last book of the series was brilliantly cenceptualized and powerfully written. The author's protrayal of our loved Gods Ganesh, Karthik, Siva and Sati is simply awesome. Love the depth of each and every character, loved the intelligence behind every war strategy and loved the fact that the words weaved amazing visuals of ancient India.
READ MORE

A Good Ending to an Epic Journey

Cheers for fast delivery, i was somehow controlling my horses for this final part and what added to delight is the Quick Response Time of flipkart team.Amish has illustrated the whole Journey in a gigantic view with noble narration.It was the most awaited part and finally the story ends.Well one will definitely miss the War and the tactics that were in Second part but on moral grounds this part is up.what i was expecting a massive and a large scale war but if you go with the theme and crux of...
READ MORE

Another masterpiece from Amish

"The oath of Vayuputras" is the last book of the Shiva Trilogy by Amish. This also turn out to be another great book like it's previous two versions i.e. 'The Immortals of Meluha' & 'The Secret Of The Nagas'. Although some part of this books seems quite slow and more descriptive than usual eventful-flow. But overall this is simply a great book full of mystery, adventure and thrill.
So, in one word this is a mast read book for all bookworm like me.
This particular package is a wonderful offer ...
READ MORE

Amish is a fabulous story teller. Every scene brilliantly written. Won't talk much about the story as it may reveal the secrets. But yes, you will surely love the final part if you enjoyed the first 2 parts. I didn't expected the end to be the way it was, but it is justifiable. Too much detailed description sometimes make you feel to skip it and directly jump to the action part. The secrets revealed hold some logic and are not introduced just for the sake of making it a thriller.
READ MORE

The virtual life story of Lord Shiva is very well imagined by AMISH and expressed in a very nice manner.. once you start reading you don't feel to do anything expect reading the book. its an awesome book. And also the Best Series released in INDIA. . :) Must Read. . :)
READ MORE

a fast paced ...accelerating and coming out from my soul..... its amazing even in after just reading first 10 pages, every sentence is thrilling and swirling world of imagination toed to the spritual faiths..... wow
...It was not like reading a book but watching it really infront of your subconscious eyes
.....HAR HAR MAHADEV.....
...AMISH...I WANT TO MEET YOU...PLZ
READ MORE

The book is a big letdown for me. The first two books worked because they always had a mystery to reveal which keeps you engaged. But in this book the mystery gets revealed very early and the rest of the book becomes a long yawning read in anticipation of something good and unexpected which never happens.
In all three books the character Shiva gets immense respect and devotion from other characters in story, but never does he do any deed to deserve that kind of status. So I thought maybe he w...
READ MORE

The book is amazing, just like the prequels. Amish Sir's ability to fit in characters and situations to the modern day outlook is much appreciated.
This is one of the few rare books which offers an insight into a variety of things hard to comprehend unless speculated upon.
Shiva's all engulfing personality is a winner!
A book that will stay with you forever! :)
READ MORE

I read the first two books of this series in one go. I liked the concept of this series, and the narration style.
As like the prequels the last book in the series is also gripping. But the end is not that awesome as one would expect. But still it is enjoyable read. And those who have read the first books would go for it anyway.
READ MORE