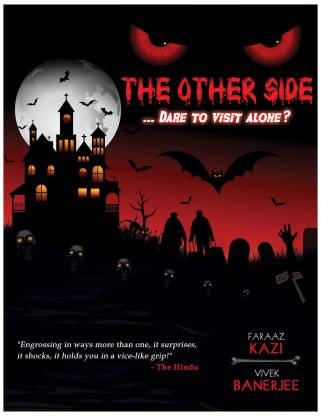 Get notified when this item comes back in stock.
Home
Books
Healthy Living and Wellness Books
Body, Mind and Spirit Books

The Other Side (English, Paperback, Banerjee Vivek)

The Other Side  (English, Paperback, Banerjee Vivek)

The horror genre is not explored all that much in our country. Few writers take the chance of writing in that genre and all writing in it is relatively new. “The Other Side” is one such book in this category. It is a collection of thirteen (how appropriate and yet so predictable) stories – all about spooky settings, ghosts, spirits and about the other side.

From stories about a newly married couple moving to an abandoned house (this one gave me the creeps) to the story of a creature who wears red bangles, the stories are of course on the edge of seat ones, but at the same time seem repetitive and done before. Having said that, the writing is clear and lucid and makes you want to turn those pages.

A slow rasping sound made me turn. I jumped back, the cell phone leaving my hands and smashing against the concrete floor. Someone was seated on the chair, rocking back and forth. Through the fallen light, I could see those hands placed on the arms of the chair, two gruesome wrinkled limbs with ugly boils plastered over the black skin. The red bangles on its wrists shone in my eyes, momentarily blinding me. That thing and I call it a thing because I could sense it wasnt human as no human could have such a hideous form, as vile an existence as the one seated opposite to my horrified self.

From a honeymoon in the hill that goes horribly wrong to an obsessed lover who wants his first love in life and in death; From a mentally deranged man who collects body parts of various women to stitch together his dream girl to a skeptic who enters a mansion of horrors to win a bet and much more, this book is filled with scenarios that are guaranteed to give you goosebumps and sleepless nights.

The Other Side is a collection of thirteen tales of the paranormal; a world that our eyes refuse to see, our ears deny hearing and our senses ignore the feel of. This is a book for someone who is brave enough to take up this invitation to journey through uncharted waters along with the authors, who were inspired by some bizarre experiences to pen down this work where the lines of reality have been blurred by the footsteps of imagination.

Each story takes you on a tour de force of unadulterated horror and draws upon the deepest fear in the human mind- the fear of the Unknown! .

The recipient of the YCOF national Excellence Award and the winner of the National Debut Youth Fiction Award 2013, Faraaz Kazi is an Indian author primarily into mainstream romance. Also called as The Nicholas Sparks of India. A certified soft-skills trainer and a three-time post grad, Kazi operates his own academy in Mumbai and is the Founder and CEO of Digi Imprint Solutions, a social media agency for personal and corporate brands. He also consults for a few public relations firms and publishing houses. He is fondly referred to as The Young Marketer and operates a revolutionary blog with the same name and writes for major media houses.

Kazi is a fellow member of the esteemed Film Writers Association of India. Truly Madly Deeply his debut mainstream romance novel is the only Indian book to be nominated in seven categories of the Goodreads annual readers choice awards, apart from being the first Indian novel to win the Best Debut (Romance) during the same awards and is also the only Indian book in the Top 100 YA Global Fiction list. He is a voracious reader and counts singing as his second love.

You will jump in fright after finishing this

'The Other Side' promises to make the environment around you seem completely different than what you are accustomed to and I believe it delivers exactly that. I can't view certain things in the same manner ever again.
The book is disturbing, the way horror books are supposed to be and pleasantly so, because that is what a good horror reader thrives to find in a good horror book- the perfect fright! This book lives up to all the hype it has created in the market.
The stories initially will sho...
READ MORE

Here's a review of all the 13 stories in the book. Really enjoyed reading them all!

1) UNFULFILLED DESIRES- 3.5 stars. A story about a doc who is sent to handle a public health centre which is said to be haunted by the ghost of a girl who committed suicide there. Initially I thought it was too long, but once I got reading I thought it was just about ok. I wanted a little more closure and didn’t understand the doctor Rajiv's attraction to Poonam (I thought she needed more depth, or at the ver...
READ MORE

Fit for a scare fest kind of movie

The Other Side is one of the few books I believe should form essential reading for any horror fan. Not just because it is the biggest attempt so far in Indian literature market for this genre but also because of the content that it carries. Stories here have by all means, a ready market in themselves and can stand out on their own, independent of each other.
A single opinion can't influence thirteen stories in all, so I won't go into the details of what each story is like but would talk about...
READ MORE

I did the mistake of starting to read this book at night. I could just make it past the foreword and then I was having second thoughts about my decision to read it at night but the writing was so gripping that I could not control my excitement and went on. Two stories down, I thought the shadows in the room were eyeing me and since I was alone that night, I decided to shut the book. I spent the entire night, biting my nails and jumping at sounds here and there.
Inspite of that, I continued r...
READ MORE

This scary book by Vivek Banerji and Faraz Kazi is about the line where the dead meet the living and what transpires then. The book is gripping, too over-gripping right from page one and I found myself wanting to go even when one story ended and time didn't permit me to move on to the next.
The stories aren't too long either. They are good quick reads that thrill and entertain to the maximum. In toto, there are 13 stories, some of the prominent ones being 'That Fateful Night', 'A Mother's Lov...
READ MORE

Highly recommended book that leaves a mark on the reader

A delightful collection of ghost stories full of otherworldly creatures. Here you'll find the traditional woman in a white sari ghost to the more moderner versions of vampires, werewolves and creepie-crawlies. While maintaining a black and white whimsical horror, the book lets out that campfire story telling kind of mode or read if you dare kind of challenges openly from the cover itself.
The writers have done a good job to research, document, fictionalise and write about ghost stories set in...
READ MORE

Fantastic Book That Will Amaze You

The Other Side by Kazi and Banerjee is an amazing piece of literature. Right from the time it starts with the brilliant Kazi lending his wordy marvels to the foreword to the time it ends with the shocking epilogue that you should at no cost read at night, the writing simply holds the reader in a vice-like grip.
All the stories are marvellous, some scary, some not so scary and some downright terrifying in terms of the fear quotient but all the stories for sure, leave a big impact on the reader...
READ MORE

Buy it for a perfect scare ride

Out and out entertainer. More than just horror.

One of the earliest promos of the book claimed it to be the biggest attempt in Indian horror fiction, and that got my attention. I thought a little, and realized they weren't too wrong. Indian fiction is bereft of horror, though there is nothing to suggest that Indians don't enjoy a good scare. The Other Side has brought many themes of horror, some popular, others new, and executed them with sincerity. Some stories scare, some intrigue, others entertain, and that is what works for the book. I...
READ MORE

Enthralled and in awe of Faraaz Kazi

Brought this book after seeing what they proclaimed as the world's first animated cover for a book. The video was both exciting and creepy and set my interest rolling in this collection of horror tales written by the stylish Faraaz Kazi.
Need less to say the book did not disappoint and turned out to be one of the better horror books I have ever read. It nowhere comes across align with the flaws of Indian writing which are very prominent in most of the books that come out today and hence I bel...
READ MORE

3
0
Permalink
Report Abuse
+
All 98 reviews
Have doubts regarding this product?
Safe and Secure Payments.Easy returns.100% Authentic products.
You might be interested in