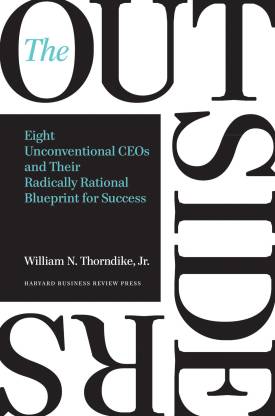 Sold Out
This item is currently out of stock
Author
Thorndike William N.
Read More
Highlights

The Outsiders takes an in-depth look into the lives of eight CEOs who have taken their firms to soaring heights. This book talks about their characteristics, skillsets, beliefs, and much more.

The Outsiders, published in 2012, looks into the lives of eight not-so-famous CEOs, and what their blueprint of success is. CEOs are usually described as managers who have deep industry expertise, and are very charismatic, confident, and Wall-Street savvy. This book, however, redefines this concept, and introduces readers to outsider CEOs who have forged their paths away from the media limelight, as well as Wall Street.

The Outsiders tells the extraordinary stories of John Malone of TCI, Dick Smith of General Cinema, Henry Singleton of Teledyne, Katharine Graham of The Washington Post Company, Warren Buffett of Berkshire Hathaway, Tom Murphy of Capital Cities Broadcasting, Bill Stiritz of Ralston Purina, and Bill Anders of General Dynamics. Thorndike has analyzed the performance of each individual, their actions, and how they have gone against the tide. These CEOs head firms that give stakeholders returns, which on average outperformed the S&P 500 by more than twenty times. This means that a $10,000 investment could be worth $1.5 million in twenty-five years.

The Outsiders shows how these leaders have remarkable skills for allocating human and capital resources, and believe in giving autonomy to local managers. Furthermore, their focus lies on the per share value and cash flow, instead of just sales or reported earnings. This book also studies the personality traits of these individuals. Most of them are humble, understated, frugal, and devoted to their families. The Outsiders debunks the myth that only firms that are headed by well-known CEOs are the most flourishing. Readers will come across eye-opening tales about how these leaders follow the path less taken, and run their businesses by using alternative models. This book also teaches how people can successfully lead their businesses to reap phenomenal returns.

William N. Thorndike is the managing director of Housatonic Partners, Boston, a private equity firm that he founded in 1994. The author has graduated from Harvard College, and the Stanford Graduate School of Business. He worked at T. Rowe Price Associates, and Walker & Company, before Housatonic Partners was established. Thorndike is currently the director of eight firms, some of which are White Flower Farm, Inc., Liberty Towers LLC, Alta Colleges, and QMC International LLC. He also heads two non-profit organizations, and has been a guest lecturer at both Stanford and Harvard business schools. Thorndike lives with his family in Boston.

The book is too costly, but it's good one. I liked it.
READ MORE