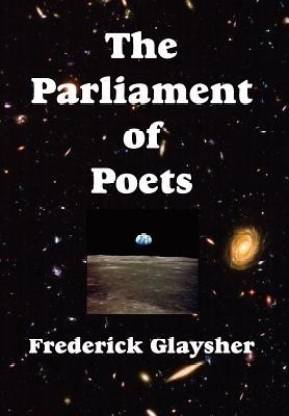 The Parliament of Poets: An Epic Poem, by Frederick Glaysher, takes place partly on the moon, at the Apollo 11 landing site, the Sea of Tranquility.

Apollo, the Greek god of poetry, calls all the poets of the nations, ancient and modern, East and West, to assemble on the moon to consult on the meaning of modernity. The Parliament of Poets sends the Persona on a Journey to the seven continents to learn from all of the spiritual and wisdom traditions of humankind. On Earth and on the moon, the poets teach him a new global, universal vision of life.

All the great shades appear at the Apollo 11 landing site in the Sea of Tranquility: Homer and Virgil from the Greek and Roman civilizations; Dante, Spenser, and Milton hail from the Judeo-Christian West; Rumi, Attar, and Hafez step forward from Islam; Du Fu and Li Po, Basho and Zeami, step forth from China and Japan; the poets of the Bhagavad Gita and the Ramayana meet on that plain; griots from Africa; shamans from Indonesia and Australia; Murasaki Shikibu, Emily Dickinson, and Jane Austen, poets and seers of all Ages, bards, rhapsodes, troubadours, and minstrels, major and minor, hail across the halls of time and space. One of the major themes is the power of women and the female spirit across cultures. Another is the nature of science and religion, as well as the “two cultures,” science and the humanities.

That transcendent rose symbol of our age the Earth itself viewed from the heavens, one world with no visible boundaries, metaphor of the oneness of the human race, reflects its blue-green light into the darkness of the starry universe. This text constitutes the ninth draft.