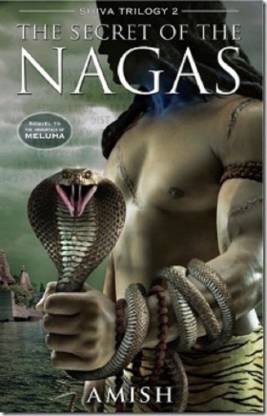 The Secret Of The Nagas (English, Paperback, Amish Tripathi)

The Secret Of The Nagas  (English, Paperback, Amish Tripathi)

Description
Much awaited Book 2 in Shiva Trilogy after the huge success of The Immortals of Meluha Today, He is a God. 4000 years ago, He was just a man.The hunt is on. The sinister Naga warrior has killed his friend Brahaspati and now stalks his wife Sati. Shiva, the Tibetan immigrant who is the prophesied destroyer of evil, will not rest till he finds his demonic adversary. His vengeance and the path to evil will lead him to the door of the Nagas, the serpent people. Of that he is certain.The evidence of the malevolent rise of evil is everywhere. A kingdom is dying as it is held to ransom for a miracle drug. A crown prince is murdered. The Vasudevs ? Shiva?s philosopher guides ? betray his unquestioning faith as they take the aid of the dark side. Even the perfect empire, Meluha is riddled with a terrible secret in Maika, the city of births. Unknown to Shiva, a master puppeteer is playing a grand game. In a journey that will take him across the length and breadth of ancient India, Shiva searches for the truth in a land of deadly mysteries ? only to find that nothing is what it seems. Fierce battles will be fought. Surprising alliances will be forged. Unbelievable secrets will be revealed in this second book of the Shiva Trilogy, the sequel to the #1 national bestseller, The Immortals of Meluha. About the AuthorAmish is a 36 year old, IIM (Kolkata) educated boring banker turned happy author. The success of his debut book, The Immortals of Meluha (Book 1 of the Shiva Trilogy), encouraged him to give up a fourteen year old career in financial services to focus on writing. He is passionate about history, mythology and philosophy. He believes there is beauty and meaning in all world cultures and religions. The Secret of the Nagas is the second book of the Shiva Trilogy.Amish lives in Mumbai with his wife Preeti and son Neel. He is presently working on the third book of the Shiva Trilogy, The Oath of the Vayuputras.Know more about the Shiva Trilogy books through: Web: www.shivatrilogy.com Facebook: www.facebook.com/shivatrilogyInteract with the author through: Twitter: www.twitter.com/amisht Facebook: www.facebook.com/authoramish
Read More
Specifications
Book Details
Contributors
Frequently Bought Together

When I started i could not imagine Ganesh and Kali's characters.I liked the concept of Nagas the most. Though the book is not as good the first part it will keep you engaged. The book is bit stretched in some parts.Still overall a good thriller.
READ MORE

I orderd this book and instead of delivered book named the secret. I requested replacement but now it's again showing will be delivered only after 6 days
READ MORE

Cheap quality paper and print. Not what I expected in this price.
READ MORE

One star less because few pages have light print otherwise this novel is a good read.
READ MORE

The print quality of the book is so bad that it feels as if i have got some pirated copy.
At times it is difficult to even read

I recently purchased a book from Amazon. The print quality was really good. Please be informed that the vendors listed with you are fraud.

It shall be nice if you can replace the said novel. Though here i must tell you that i don't have the original packing of the novel
READ MORE