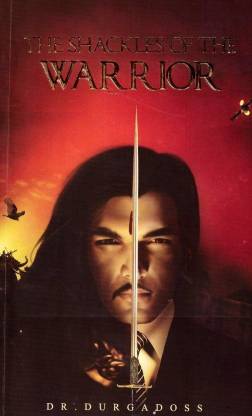 The Shackles of the Warrior  (English, Paperback, R. Durgadoss)

Description
A terrorist group strikes the world by planting viruses into global computer systems From a satellite orbiting the earth. This act of cyber terrorism disrupts air traffic Systems, interferes with the control systems for water and electricity, blocks commercial communications, crashes various network systems, gains access to Secret military information and defaces various websites. In light of this cyber, the world is facing a chaotic situation.

Shiv, a young, celebrated NASA scientist destroys their moves and saves the earth attacks. To honor Shiv's extraordinarily brave performance, a felicitation function was held at Taj Mahal Palace Hotel, Mumbai on the fateful day of 26th November 2008. Shiv, the cyber warrior, becomes a victim to a physical terrorist attack the Taj Hotel. His mind flashed several images in a state of coma, in the ICU of a leading Hospital in Mumbai. The images of war, weapons and weeping Widows flashed in his mind.

What has he, the famous NASA scientist to do with a warrior of the 3100 BC era? The secrets buried in the silent chambers of his soul are unraveled.

About the Author
Dr. R. Durgadoss (His associates call him Dr. DD ) is an entrepreneur, inspirational speaker, Writer and a coach. He holds a PhD on Corporate Finance. He has a career spanning two decades with leading multinational institutions of high repute. He has a deep rooted passion towards Indian mythology, history and philosophy. Since his childhood he could attract a number of followers around him with his mesmerizing story telling capabilities. Wherever history is a mystery he powerfully fills gaps with ease, with his creative thoughts. Having held his spellbound audience with powerfull story telling effect during his Various lectures in various international forums, he thought it is time now that he Focuses on a series of fiction in the historical / mythological genre. The Shackles of Warrior is the first release from his contemplated series. He has styled himself as a stress buster and a hope builder for the generation next. He is currently living with his family in Dubai, serving as a Group Director of a Large Corporate.
Read More
Specifications
Ratings & Reviews
4.6
★
12 Ratings &
12 Reviews
5

The book is not only interesting but is also easy on the eyes when reading. The story is good and moves at a good pace. The twists and turns are excellent. What stands out though are the description of the Mahabharat times and Dwarka.
READ MORE

A book worth reading again

Though I am not an avid book reader, something provoked me to buy this book. And every page I turned into made my read never ending. Apart from the interesting storyline, the author of this book has loaded lot of minute details from history which truly reveals our less known past. Overall a great book to read and the twist in the last chapter was amazing.
READ MORE

A book to read

Very nice book with every character chosen for a purpose.Nicely drafted and written in a clinical fashion. Enjoyed reading the book all through. The last couple of chapters are very interesting with exciting twists.
READ MORE

I just finished reading the Oath of Vsyuputra and was searching for a good book to read and I came across this book and bought it immediately. I was in for a big surprise, such a nice story line entwined during the period of Mahabaratha with such perfection. A good book overall and thumbs up to this book and the author.
READ MORE

My hubby gifted this book to me last week on my birthday. I was expecting something exciting but it turned out to be a book which I regretted later. It is not just a story about a warrior but it has so many values hidden in each characters which is neatly manifested in the book. I enjoyed reading the book and thanked my hubby for gifting me one.
READ MORE

I just read the first chapter recently available free online...And for a non reader like me..I was quiet curious to read on further, to find the connection between 2 contrast personalities..''One in today's world and the other almost going back to 3000 BC''. So all the others who are contemplating whether to go for it...TRY IT !!!!...You can visit the site and have the first chapter downloaded.
READ MORE

Over the last few years there is a spring of Indian authors, that too writing stories which talks about our culture, tradition, religion, practices and our past. Dr Durgadoss has beautifully blended all this with an interesting story. I enjoyed reading the book.
READ MORE

The book is lucidly written and the twist at the end will make you gasp. Even the trailer of the book can give a good peek into what to expect. A must watch and a must read. One should have a look at the trailer to get the gist of it...
READ MORE

Just finished my semester and it was so boring and I came across this book online and thought I will buy this book to kill time. I started reading and it was the other way round I kept on reading till I finished the book. With all the warriors and the plots it was a mesmerising read for me.
READ MORE

I had the distinct advantage of reading the full book in the manuscript stage itself. The amalgamation the past and present come together in a heady cocktail. The descriptions of the battle and the society of 3100 BC will be an eye opener for many of us. For a fiction reader a must have and for non fiction reader there is more substance in the book than a regular racy thriller.
READ MORE

1
0
Permalink
Report Abuse
+
All 12 reviews
Have doubts regarding this product?
Safe and Secure Payments.Easy returns.100% Authentic products.
You might be interested in