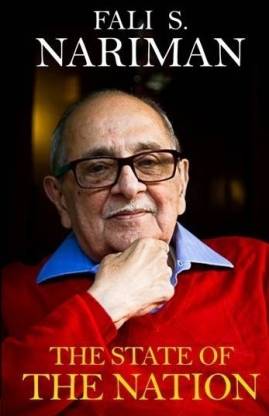 The State of the Nation (English, Hardcover, Nariman Fali S.)

The State of the Nation  (English, Hardcover, Nariman Fali S.)

The State Of The Nation by Fali S. Nariman is a meticulous and analytical account of the present scenario of the nation from a constitutional perspective.

This engaging book by Nariman focuses on the many common problems of the executive, legislature, and the judiciary. The book highlights the high levels of corruption and the many consequences that the common man has to face due to it. In his daring book, Nariman attacks the various levels including the judicial system. The book highlights the incompetency and failures of the elected representatives.

Divided into six parts, the book also focuses on pertinent problems like India's concept of unity in diversity, higher judiciary and general polity, and federalism and the higher judiciary. The State Of The Nation highlights the demerits of the reservation system, the actual role of the Constitution, and the merits and demerits of the constitutional system over the years.

Who will judge the judges? How are the judges appointed? Who recommends and selects them? Why are judgements delayed or remain undelivered? Nariman, in this engaging account, seeks to find the answers to many such disturbing questions.

The author also reveals the problems of the Indian government. He points out how we have failed in the implementation of the directive principles of the state policy, which are fundamental to the right governance of India. Nariman also focuses on the law makers and the luxury that they have misused and over-indulged in.

Fali Sam Nariman is a well-known senior advocate, constitutional expert and jurist of India. He has also written India’s Legal System and Before Memory Fades is his autobiography. Born in Rangoon in 1929, Nariman completed his education from Bishop Cotton School in Shimla and St. Xavier’s College, Mumbai. He completed his Bachelor’s degree in History and Economics and LLB degree from Government Law College in Mumbai. He has many significant awards to his name like the Gruber Prize For Justice, the Padma Bhushan, and the Padma Vibhushan. He was also a member of the Rajya Sabha. Nariman is also the President of the Bar Association of India and is an important authority on international arbitration. He is married to Bapsi F. Nariman and has two children. He lives in Mumbai.

An exemplary perspective of things

An excellent read - its like borrowing perspective of a erudite man.
Very well researched commentary building up to its critical mass steadily never losing sight of the running commentary progression on the current "state"of affairs.
It is content heavy(with equally vibrant 'references' approx 20% of the volume!). It deals with topic like corruption, the coalesce of states into a nation, strength/falling of national leaders etc. Few topics but thoroughly dealt with.
A measured pace of narra...
READ MORE

Touches your heart, Piques your mind!

I had heard Mr Nariman on TV, was impressed by his insight and I immediately ordered this book off flipkart. Boy! I was not disappointed at all. I am an applied math Ph.D student and I was worried originally whether I would follow the judicial jargons, the court cases and the technical terminologies. Now that I have read half of the book, I am very happy I picked it up. The book is written in a very simple language and he does not beat around the bush.

He explains what the country stood for ...
READ MORE

really very impressive book by Fali Sir...!
Superb...Loved the language and the way of communication.
If you love reading political nature literature, then its a really very good book to have and read.
Hats off to Fali sir.! :)
READ MORE

The book is easy read and understand; the author has consciously attempted to avoid legal jargons and the arguments are pretty simple and straight and not legalistic. The work takes us through land marks judgments and event in the history of our constitution.
READ MORE

I am a Professor of Law and I purchased this book only because of the author. I didn't really know what to expect from the book. I am thankful that I read this book, especially chapter 3 and the last chapter. The only drawback of this book is that you might not be able to 'enjoy' this book if you are not some how versed with Constitutional Law (not necessarily of India). The book discusses several important Indian Supreme Court decisions but not from a legal angle. Though to the credit o...
READ MORE

reading his first book. till now completed 50 pages in one sitting bcz of language he used in the book very simple and mixture of history-constitution made it fascinating. one who is preparing for Civil service must read it. last but not the least flipkart rock again with super fast delivery and sound packaging.
READ MORE

You need not be a student of law to understand this! An amazing book for every Indian to be encouraged in being pragmatic yet pursue ones ideals. History - well detailed!
READ MORE

The State Of Nations isn't totally related to a federal nation state.
But the book gives a good retrospect of our judicial system.
READ MORE

A NICE BOOK BLENDED WITH LAW AND HISTORY

Mr.Nariman while presenting the present day picture of the nation, (he) adds anectodes to explain the present state of affairs of the nation. Really a nice book one would like to read.
S.PURUSAHOTHAMAN
READ MORE