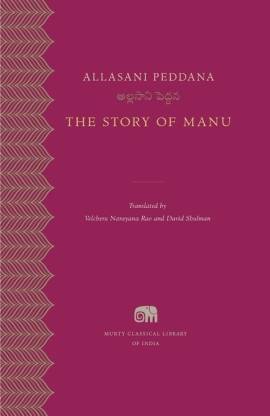 The Story of Manu is a bilingual reproduction of the Manucaritramu or the Manu Charitra, an early-sixteenth century poem by Allasani Peddana. This edition presents both the English translation and the original Telugu script.

In the early sixteenth century, Allasani Peddana, one of the great poets of the court of King Krishnadevaraya of Hampi, composed his magnum opus, the story of the great king Manu, the ruler of the first cosmic age. He explores the legends around Svarochisha Manu, blending imagination and popular myth into his poem. In doing so, he also presents a unique idea of what kingship symbolized during the time of King Krishnadevaraya, the ruler of Vijayanagara. Presenting a unique picture of the times, this book brings readers the first translation of the story of Manu into any language.

Velcheru Narayana Rao is an academic and a visiting professor at the Emory university where he handles South Asian Studies.

David Shulman is an academic and the Renee Lang Professor of humanistic studies at the Hebrew university of Jerusalem.

The earlier one star review makes no sense. what's not to like? I was eagerly awaiting the first series of books in the murty classical library and this work is arguably by the most famous telugu scholars translating classical telugu.

The font is very easy on the eye and the fonts are available for general use - a very nice gesture, I would have liked a transliteration and the paper quality and binding (have we lost the smythe-sewn binding art?) are a bit of sore point given that you woul...
READ MORE

The book arrived within stipulated time. Payment on receipt of book was no problem. However, there is one issue: the courier informs in the morning (around 7.45 a m) that he he will deliver any time up to 7.00 p m. It is not possible to wait at home all day. I wish the courier could fix a smaller window of time to deliver so that it is convenient to wait for the delivery.
READ MORE

the title is good

but the print inside is akbarnama and not manusmriti .how could such an error go unnoticed .The cover page talks of manusmriti and the first page onwards its abul fazal's akbarnama in Urdu and its English translations
READ MORE