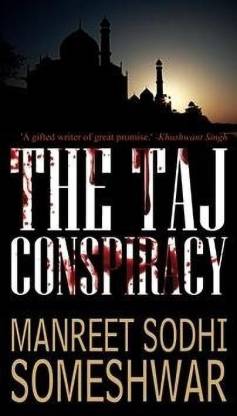 In this thriller novel involving a right wing Hindu party and an imminent terror attack by Islamists, a Mughal Scholar stumbles across a conspiracy to fake the history of the Taj Mahal, leading to its destruction.

Mehrunisa Khosa discovers the murder of a supervisor of the Taj Mahal, and an altered Quranic inscription to prove that the Taj was a Hindu monument. The discovery could prove disastrous, for although the theory had been abound for a long time, proving it could spark a controversy as strong as the Ayodhya conflict. In the labyrinths under the monument, Mehrunisa discovers plots that involve the machinations of a communal Hindu party and Islamic terrorists primed to attack the nation yet again.

Manreet Sodhi Someshwar is an Indian writer. Her debut novel: Earning the Laundry Stripes was a best-seller.

She graduated from IIM Calcutta and began writing in 2006, earning critical acclaim.

Read More
Specifications
Book Details
Dimensions
Ratings & Reviews
3.8
★
233 Ratings &
68 Reviews
5
The Taj Conspiracy, the first of a three part trilogy, is highly compelling and befits the genre of a thriller very well. For author Manreet Sodhi Someshwar, it is a literary achievement with brilliant and engaging descriptions as well as a fast paced yet astounding plot.
The characters of the story are diverse, yet easy to associate with and envision as actual people. The author promotes a feeling of tension by creating intricate relationships based on love, hatred, as well as revenge.
Thi...
READ MORE

...you know mention Taj, A Conspiracy; and people start thinking of the City By The Sea. Sodhi-Someshwar steers us gently to that other structure which has seen more than its share of tragedy,mystery,dreams.
If a book has you parceling off your kid for the day "which is good for your darling, you will have soo much fun", playing hookey from your own commitments, and then plonking that kid on the commode when he returns (and conveniently "forgetting" him so you can race through its final pag...
READ MORE

Gripping presentation, based on thorough research! Very much Dan Brown-esque...

First of all, hats off to Manreet Sodhi for such a wonderful, fast-paced book! I read in one sitting on a Sunday, and it was a day well spent!
The story starts at break-neck speed with the female protagonist Mehrunisa Khosa stumbling upon a very unexpected scene right in the heart of the Taj. What follows is sheer research and solid writing skills, as Mehrunisa along with CBI investigator R. P. Singh set out unfolding the mystery. What is the Taj conspiracy? Who has plotted it? Is this extern...
READ MORE

Worthy of many readings...

When I got this book I was actually expecting a bit of history & drama. I did get that but with an amazing touch of suspense & fast-paced action. I specially loved the plot as it involved a lady protagonist Mehrunisa Khosa, who had every bit the charm of a sophisticated Mughal scholar & the wit and sharpness to go with it.The characters are wonderfully developed & this book is definitely a page turner. the historical facts are also dealt with in a very interesting way, leaving the reader curi...
READ MORE

Enjoyed reading,Very interesting insights into the history of the Taj Mahal. cannot imagine the amount of research done to give authenticity to the Novel.Great pick,Will be a best seller for sure.Looking forward to the sequel.Loved the way the characters in the book have been etched.Mehrunisa Khosa the protagonist is a sassy girl with an unusual career choice researching history.Not too many Whodoneit books with a girl at the lead.The best part of the novel is it is believable.
READ MORE

The book is about events revolving around Taj. The author has done her research and this is clearly seen in the authority of her writing. Aruguments and counter arguments gives you a neutral perspective about Taj. She takes on many theories about taj and throw light on the subject. Once you read the book, the reader is left with few thoughts and theories, with no conclusion. No conlusion does not mean no ending, but a conclusion about the taj itself. I'm sure that you will love this book espe...
READ MORE

Manreet has done a good job with keeping up the suspense till the last minute! Amidst of so many conspiracies relating to TAJ.. this book comes with a fresh and very welcome perspective.

All in all a very good book to read!
READ MORE

One of the wonders of the world, the Taj Mahal often defines India. Yet, there is so little we know about it. We know about the love story, yes, but there is so much more! Manreet Sodhi Someshwar has successfully brought the Taj to life. This is a book to love. There is history, there is mystery and lots more in between. Each character is strong and lively. The protagonist, is aptly chosen and she leads the story beautifully to a climax. The events are connected so wittily that one must compl...
READ MORE

2
0
Permalink
Report Abuse
5
I devoured The Taj Conspiracy in less than a day. A fun fast read with intriguing information on Taj Mahal and a heroine I absolutely loved! Mehrunisa is totally brilliant - never a dull moment wit her - and has me convinced that history is NOT boring. I can't wait to read the next book in the trilogy!
READ MORE

A Damp Squib of an amateurish attempt...

If you have not experienced disappointment lately, this book is for you !! Sheer disappointment will hit you hard when you finish reading it, and think backwards on the story line.
It begins with a Da-Vinci-Code inspired death scene of a man - Aroon Toor, who is the Supervisor at the Taj Mahal. By the end it is revealed that the corpse was actually the Director of ASI, Raj Bhushan; while the young Supervisor thereafter merrily masquerades as the Director himself, with the help of a false be...
READ MORE

2
1
Permalink
Report Abuse
+
All 68 reviews
Have doubts regarding this product?
Safe and Secure Payments.Easy returns.100% Authentic products.
You might be interested in