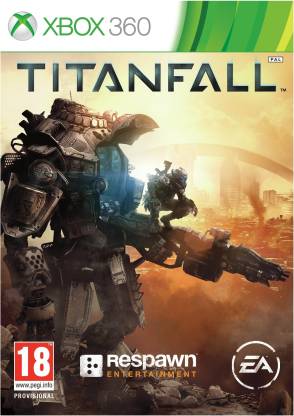 When you don’t have a planet to call your home and are travelling through the vastness of space to find a new place, how far would you go to establish your presence on a habitable planet? A multiplayer-only action-adventure first-person shooter game for the Xbox 360 console, Titanfall sees the player controlling a member of a roaming space fleet that is confronted by a corporation that intends to seize the planet that the former chooses to as well.

With a PEGI rating of 18, the gameplay of Titanfall involves you fighting either as a parkour-trained pilot or as the controller of a mech-styled walker called a Titan in order to accomplish team-based objectives as part of the Militia or the Interstellar Manufacturing Corporation on a war-torn planet. Despite being an online multiplayer-only game, Titanfall also incorporates single-player elements such as non-player characters and a plot. The game begins with 12 human players being dropped on a map after selecting their pilot types. There is a timer until the Titans are released and killing other players will reduce the timer. Protected by a force field for the first 30 seconds, Titans have unique skills, animations and are slower in comparison to the pilots. The pilots are agile and are able to double-jump as well as run on walls when enough momentum is built. Titan-specific abilities include an electrified smoke which maims and repels pilots climbing up the Titan’s back, and the Vortex Blocker which hurls incoming ammunition back towards the pilots. Pilot-specific skills include the Smart Pistol which shoots around corners. This game has a campaign multiplayer mode which has character dialogue and scripted sequences as well.

Note: The game requires you to be connected to the internet for the full experience.

This game is Over-Hyped. Please trust me!

I hope you didn't fall into the trap of ordering the game just because it "won the most awards". Seriously trust me when I say that this game is simple not worth the 3,000 bucks that I had to dole out for it. Let me make a list of pros and cons for the game here -

Pros :
1) The level design is fantastic. Good attention to overall detail, textures.etc.
2) Interesting combination of parkour mixed with your normal running and gunning style of gameplay.
3) "Titans" is a good concept in the game...
READ MORE

this game is undoubtedly awesome FPS game ,i pre ordered this game 1 month ago , i want this game so badly :D, multiplayer campaign is so awesome ,you dont need a heavy gaming pc. it will run on decent gaming pc :) .


AND I WANT EVERY PC GAMER WHO BUY THIS GAME PLEASE WRITE YOUR ORIGIN ID SO WE CAN CONNECT WITH EACH OTHER :)

mine is : ZUBERKHAN12
READ MORE

The Truth behind Titans

Unless you have a XBox Gold Membership & an strong internet connectivity - this is going to be a piece of junk for you. Yes- this is definitely a great multi-player FPS for a country like USA may be.For Indians - this is a challenge. Oh yes - you do need disk space. And at XBox 360 - I did face some stiffness at times.
Recommend: Don't buy! You will rather get much better VFM from Battlefield or COD franchises.
READ MORE

Pilot, Your TITAN Is Ready

what a game !.....simply awesome.its fast paced,its multiplayer ,its action action and action,what more do u want ? when i first played the beta , i was sure i am buying this ,the gameplay is just awesome and graphics are good too and this game is just about the gameplay so forget graphics and play like a insane freak,the maps are awesome,so many ways to kill so u guys gonna enjoy a lot like me ,so don't think and buy it

there some servers issues,which has been fixed but sometimes u may get ...
READ MORE

No Asian or Indian servers yet, you will be getting high pings and frequent crashes. You wont be able to play a single game properly.

The game is pretty exciting from the moment you get your Titan. You get bored very easily after playing this game for like 2 hours, unlike Battlefield 4. It also lacks the huge maps of BF4. The graphics of the game is good overall. Titanfall totally lacks recoil. It just feels pretty bland and can be called "COD on mechs".

Overall, the game will be loved by...
READ MORE

I do not want to rate this game because I have not yet played it. But since I cannot submit this review without rating it so I have given one star. This is just my frustration since I am visiting this game on flipkart since it got released and I have not seen any significant price drop for this game. BUT that said, I desperately want to play this. I will only talk about the price of this game:

I had got the beta access to this game and believe me the graphics for the game are fantastic including the types of weapons offered. Although the beta access had only two maps I think some more maps like Airbase have extraordinary graphics. But EA's pricing for this game is very high. Can't help with it because EA's pricing is always high for any game be it Fifa or Battlefield. The game provides me 60 fps on ultra

Pros:-
-Fast click and shoot
-The arrival of titans and the mechanism of gett...
READ MORE

First off, 48GB of installation space required!!!!! Yeh, the makers believe this ways the game can be played on low configuration rigs too. Unfortunately, you won't really enjoy the graphics or the gameplay much if your rig can't match the graphics this has to throw at you.

Secondly, THIS IS A MULTIPLAYER GAME. It has no Single player campaigns so don't go out reading this and that on TITANFALL and purchase it to play solo. It needs net connection and a good one at all times to access Lobbie...
READ MORE

-no single player mode, only multiplayer online.
-Its cheaper on origin website.
-I liked the game a lot, exhilarating experience , but got bored in few weeks.
READ MORE

Flipkart delivers on time. Very good packing and service which you can always expect from flipkart.
1. This is possibly the best game one can get if they want to go for fps cause pure adrenaline pumping action and thrill has never been seen on this level.
2. I have played all cods, battlefields and crysis and believe me nothing comes close to titanfall.
3. Disclaimer! This game is multiplayer only. There is no single player content.
4. Although there is a campaign, it is multiplayer with a me...
READ MORE

0
0
Permalink
Report Abuse
+
All 40 reviews
Have doubts regarding this product?
Safe and Secure Payments.Easy returns.100% Authentic products.
Back to top