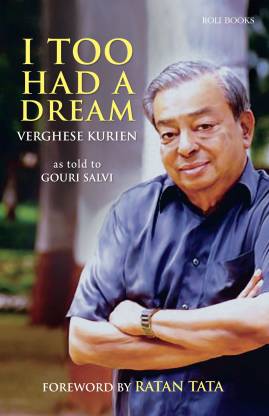 I Too Had a Dream (English, Paperback, Kurien Verghese)

I Too Had a Dream  (English, Paperback, Kurien Verghese)

Dr. Verghese Kurien dedicated his entire lifetime to the development of India. Known as the ‘Father of the White Revolution’, Kurien tells the story of his life, how he planned and shaped the milk industry in the book, I Too Had a Dream.

Summary of the book

In the book I Too Had a Dream, Dr. Kurien has penned down about his life, his contribution to the dairy industry of the country and much more about his multifaceted personality.

Dr. Verghese Kurien is a science and engineering graduate from Madras University and Michigan State University, USA, respectively. He is known as the father of the white revolution and has made immense contributions to the dairy industry. He has penned down the book I Too Had a Dream which is a collection of his memoirs. 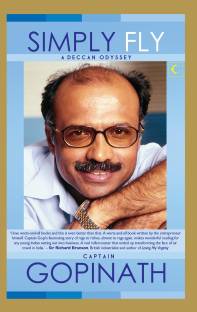 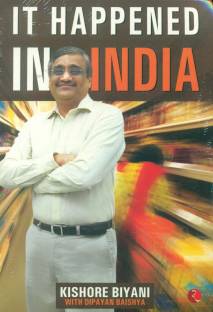 Read this book...it is about an engineer, who knows nothing abt cows, went to build asia's largest milk co-op. this is a story of a young indian with fire - like most of us are. it will tell you what it takes to get things done.

i specially like the para on pg 196, where NZ officer threaths Dr Kurian to stop exporting amul abroad, and global market 'belongs' to them. having already heard a lot an angry kurian says 'if all indians were to spit, your nation will drown in it. dont tell me what...
READ MORE

I have always admired Amul butter and i still do cherish it as its part of my breakfast. It's from here the curiosity grew to find out who was behind AMUL. Having read this book gave me a clear insight of a man with a mission to serve our nation's farmers.

It must have been a very frustrating journey for Dr. Verghese Kurien to tackle government bureaucracy apart from the serious ground issues in creating a world class organisation.

With little funds and many hindrance, he was still able to ...
READ MORE

I just could not beleive one man could stand so much opposition and win so many people's hearts in the notorious buearocracy of India. Anyone else would have given up after the initial years. And just look at the salary he took till the end...! Would anyone of us dare to walk along such ways? 50+ years committed to a country's welfare--he deserves all the awards this nation can bestow upon an individual.Sorry, he is not an individual, he is an institution by himself. All his team members and...
READ MORE

All of us have one life, each day with 24 hours evenly distributed. Yet, so few of us create real value within this time. Verghese Kurien packed so much into his allotted time in this world, quietly and persistently adding immeasurable value to millions of other lives.This book is about The dreams of an engineer to be part of the white revolution and his exit from the field after his never ending vision.

It all started when Verghese Kurien returned to , in his words , "A horrifying and divi...
READ MORE

Autobiography of Dr Verghese Kurien - the founder of the White Revolution....it is a splendid tale of this legend who shaped India's history and specially of the milkmen! he was a true inspiration to so many of us...this memoir captures the essence of his hard-work, perseverance, never-say-die spirit, challenges and his mad streak in the most honest form...definite must-read for all those who want to know more about this legend....
READ MORE

This book covers from pre to post liberalization situation for cooperative movements across India, particularly the diary cooperatives.

Kurian hints how the bureaucratic institutions perform, how ministers influence the decisions. This book is about the fight of common farmers lead by their manger in the government, against the self-centered people from the same government.

It's a great read and a refresher.
READ MORE

I came across this book in a quiz event, and being a book freak, bought this immediately... and from the start, this book held my attention; thus accompanying me on my way to home and back from hostel on the college bus, and finished it in 10 days. a journey of the pillars of the white revolution...
verghese kurian- the wall against all adversaries...
tribhuvandas patel- the union maker...
vallabh bhai patel- the visionary...
and...
the faith of the farmers...
it has been a fantastic re...
READ MORE

This book is about the revolution in milk production in India brought about by Dr. Verghese Kurien, who devoted a lifetime to pursue his dream of empowering the poor farmers of India. It wasn't a dream of his as he started out his professional life but he was drawn into making it his life's work after watching a group of farmers in Gujarat forming a milk cooperative under the leadership of a local farmer Tribhuvandas Patel. Kurien was impressed by the integrity and commitment by Patel and his...
READ MORE

Dr Verghese Kurien has put down all his life's work and the difficulties which he had to face while working at the cooperative. He has been very frank and expressed his disappointment as well as gratitude towards the government and its working. Truly inspirational and recommended for all the age groups to understand the sacrifices, pain and hard work Dr Kurien had put in to form AMUL.
READ MORE

This is the good book and very simply covers the entire journey of a great person through which he successfully led the campaign of farmers interest. Its a journey of the creation of AMUL brand by only organising farmers with the ultimate aim is to protect the interest of marginal & small farmers.
READ MORE