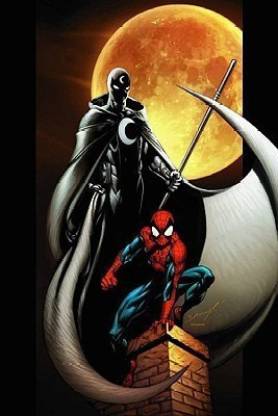 Spider-Man finds himself in the middle of a gang war, one that begins with a power vacuum created by the Kingpin’s retreat. Warriors is the fourteenth volume in the Ultimate Spider-Man comic book series by Brian Michael Bendis.

The Kingpin has retreated from active mafia work. In his absence, wannabe mob-bosses try to fill the void. Hammerhead Plus takes center stage as he tries to grasp the power left behind by the Kingpin. However, there are others in the fray, including the mysterious Moon Knight. In his attempt to bring peace to his beloved metropolis, Spider-Man will need to come to terms with his dual lives and make a choice. Will Peter Parker be put to a complete rest, once and for all?

Brian Michael Bendis is an American comic book writer and artist best associated with the creation of the Ultimate Marvel Universe.