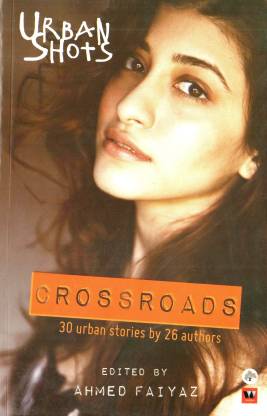 Urban Shots: Crossroads is a collection of short stories by multiple authors. The book paints a realistic portrait of different characters across India, showcasing their ambitions, fears, and secrets.


In Urban Shots: Crossroads, Ahmed Faiyaz has compiled a number of stories that revolve around the urban concrete jungles in India. Works of writers, engineers, teachers, journalists and people from different backgrounds have been brought together in this book, giving it a more pungent taste of reality.


This book features a number of characters, each one different from the other. Some of the interesting characters from the book are Dr. Basu, a veteran gynaecologist who makes it big on the news, Sahil Seth, a man locked in a love triangle, a 17-year-old girl and her single mother, a lonesome kid with a beautiful bicycle, and a drunk man trying to get off a fast moving train in Mumbai. The book also features a kid who falls for his tutor and a woman with a troubled past who finds herself in the crowded bazaars of Mumbai.


Urban Shots: Crossroads is a compilation of 30 short stories, and the book paints a distinct picture in the minds of its readers.


Ahmed Faiyaz, the editor of Urban Shots: Crossroads, is a Chartered Accountant Consultant, a civil servant, and an author.


He is the author of Love, Life & All That Jazz..., Another Chance, Down The Road, and Scammed.

Urban Shots Crossroads is a delicious collection of urban tales that give you a passing glimpse into the lives of quirky characters in urban India that stay with with you long after you've read the last story. A brilliant and refreshing anthology put together by best selling author Ahmed Faiyaz and containing the collected writings of seasoned best selling writers, bloggers and many promising new authors making their début with this collection.Highly recommended
READ MORE

Utter nonsense. how on earth stories like these get shortlisted for being published!
Most of these writers don't even know how to weave a short story, how to begin with and how to end!
Wake up Mr. Editor! Are you out of your mind?
I'll never recommend anybody to buy it. In fact if a friend sees this book in my book shelf and wants to borrow it, I'd recommend him not to waste his precious time reading these silly things.
READ MORE

The idea of 30 stories by 26 authors is what appealed to me. It is contrary to the trend of having a collection of stories from a single author. The book is quite interesting and a good page turner. While books of RK Narayan and another writer from Andhra Pradesh Satyam's share us the melody and melancholy of olden days(read it as pre & post independence), the stories in this book help us recall our childhood days and make us feel nostalgic.

Personally I recommend to buy this.
READ MORE

I have gone through 5 stories and found just one somewhat interesting , remaining all are just sheer boring.. I shall be putting some more review soon after going through more stories.

But any one planning to by a short stories should stay away from this.
A far far better and superb collection is - "Labyrinth: Short Stories" You can read my review there also.

Just when you thought it couldn't get better, we are smacked with a collection of bold, spell binding tales of urban lives and the chaos that surroundz us. Its hard to pick a best story here...every other one is a winner! Can't wait to read Bright Lights and Urban Shots Love Collection. This one really raises the bar with so many different writers and themes.
READ MORE

I bought this book after reading the earlier collection of Urban shots and this book did not disappoint me. Its a nice collection of short stories and a good read. The stories linger in your mind even after you finish reading.
READ MORE

Its an amazing book with 30 short stories..priced well...stories are bold, it paints a different picture of life in urban cities..some of the stories are hard hitting and stay with you for days....and a plus is you have kainaz motivala on the cover
READ MORE

The authors have exceeded themselves with this one. Its a wonderful collection that captures life and times in urban metros. Some stories are moving, some make you smile, some are haunting while few leave you gaping with awe. It keeps you turning pages till the end wishing there was more!
READ MORE

it is not a worth reading material!
it looks like authors are somehow playing with the situations to make story ended!!
READ MORE

I loved the book a lot. It's a superb collection of short stories, you feel connected to each and every story you read, bringing back certain memories. It's so much real, as if you are living your life the second time.
READ MORE