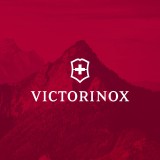 The Victorinox Rally Red Swiss Army Knife is a popular, small and light weight multi-purpose knife that is made to exacting standards with dozens of steps going into its construction. It is a compact multi-tool kit for on- the-spot use. Victorinox attends to every detail, from selecting the finest materials to performing the final inspection. The Victorinox Rally Red Swiss Army Knife is a perfectly sized pocket knife, which is very convenient to carry around and consists of the basic tools that can be used around the house for precarious tasks or can be useful when you are out trekking, mountaineering or camping. It is truly a versatile multi-functional knife designed for specific tasks.

The Victorinox Rally Red Swiss Army Knife is part of the original Swiss Army Knives Collection. The Rally is stylishly cased in a classic red housing with the iconic Victorinox logo on the side. The designer accessory weighs just 22 g and the small size allows the accessory to discreetly fit in your pocket if you are out on an adventurous trip.

This Rally Red Swiss Army Knife contains 9 handy main tools; in addition to the blade the tool features tweezers, tooth pick, key ring, screwdriver, nail filer, scissors and bottle opener. These utilitarian set of tools is held together in place with the help of a brass rivet and the metals parts are fastened to this rivet with Brass flanged bushings. The separators between the tools are made from aluminium alloy and are constructed in a manner to resist corrosion or scratches from the adjacent tool.

The standard cutting blades are made out of premium quality stainless steel and are handy around the house and on weekend excursions. The blades and other parts feature small fingernail slits to make drawing out the parts easier. The tweezers that is a part of the knife is a tool used for picking up objects too small to be handled with your fingers. If you carry this handy knife with you on an outing you need not carry an extra key ring or key chain for your keys to the car, bike or house; you can secure all the keys in the metal key ring that is fastened on one end of the knife.

There are 3 kinds of screwdrivers accommodated in this multi-tool knife; small screw driver, large screw driver and Phillips screw driver, which can be used to drive screws and bolts and sometimes for rotating other machine elements. The other function of the small and large screw driver parts is to open cans and bottles, respectively. Hence, you need not spend on an extra set of can and bottle openers.

The knife comes with a unique tool, a nail filer, which is handy for women on the go or you can use it to smoothen a sharp edge. This classic Swiss Army knife also features a toothpick; it was originally made for the soldiers out in the field. This Rally Red Swiss Army knife is affordable, works well and provides good value. Precision quality and functionality are the hallmarks of any Victorinox Swiss Army Knife.

Rally is in some ways better than the extremely popular classic SD from Victorinox. I say this because the tiny scissors, while handy, cannot cut anything more than few threads and pieces of paper. The combo tool on the Rally serves as a bottle opener, wire stripper / bender and it has the best philips head screw driver for eyeglasses that you can find on a keychain tool. Rally can only perhaps be outdone by Rambler (which adds scissors on the spare spring), but that is unavailable in India, ...
READ MORE

I have an attraction for knives since childhood and i have lots of knives, but all unbranded. This is the first time i bought a swiss knife. And to my pleasant surprise, what a knife! Specially, the blade is so sharp, that u have to be careful. I always carry this knife as a key chain. All the tools are useful for daily use. The screwdriver, the bottle opener.... I specially like the blade a lot. I daily use it to sharpen my pencil, to cut fruits etc. A must have. I must thank Flipkart for pr...
READ MORE

A must-have utilitarian keychain. The knife is really sharp. Can used to cut tough objects. Should be careful as well.
READ MORE

Very nice,handy and good for dailyuse.. bought it for rs540 .. worth buying it.
Can have it with keychain.
READ MORE

Very good and easy to use Swiss knife
READ MORE