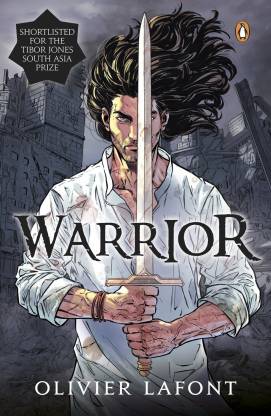 Description
In Mumbai, driven to its knees by a merciless blizzard, Saam the watchmender is cornered into an intolerable position. As Shiva's only earthly demigod child, it falls upon him to stop his indomitable father. Bred to war, son of destruction, Saam rides with six extraordinary companions into the horror of a crumbling world to face Shiva. He is forced to join hands with Ara, his half-brother he can never fully trust, and take with him his own mortal beloved, Maya, on this desperate attempt to stop the End of Days. But his path is littered with death, danger and betrayal. Interweaving mythology, epic adventure and vintage heroism, this enthralling novel will change the way you see gods, heroes and demons.
Read More
Specifications
Book Details
Dimensions
Ratings & Reviews
4.7
★
3 Ratings &
2 Reviews
4

Plot: A simple story told in many complex, yet interesting levels. Saam having his own business, settled with his girlfriend Maya, who is unmindful that her boyfriend is a superhero. Soon the readers are taken into the live action when Saam is forced to a join the quest to save the world (did I mention? The world is about to be erased). Well, it seems too mainstream till here, enter Ara, Saam’s long-lost brother who has a trick up his sleeve. Slowly, the readers are taken into a ride combined...
READ MORE

Such a story framing ability will take this author to a notable height.

‘Warrior’ is the first work of fiction by Olivier Lafont. This book is a nice thriller with a touch of Hindu mythology, history and fantasy.

The cover looks different and catchy. The sketch of a well-built guy holding a sword in hand gives this book a perfect action thriller look. The cloudy back ground and the grey flavor in the cover makes this book looks more appealing to the readers. The label of ‘Shortlisted for the Tibor Jones South Asia Prize’ will also tempt the readers to sneak a pe...
READ MORE