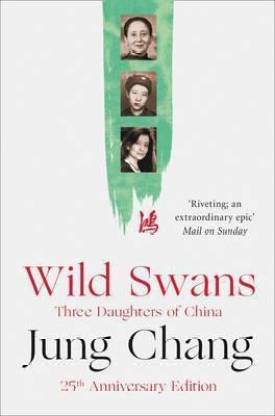 Blending the intimacy of memoir and the panoramic sweep of eyewitness history, Wild Swans has become a bestselling classic in thirty languages, with more than ten million copies sold. The story of three generations in twentieth-century China, it is an engrossing record of Mao's impact on China, an unusual window on the female experience in the modern world, and an inspiring tale of courage and love.

Jung Chang describes the life of her grandmother, a warlord's concubine; her mother's struggles as a young idealistic Communist; and her parents' experience as members of the Communist elite and their ordeal during the Cultural Revolution. Chang was a Red Guard briefly at the age of fourteen, then worked as a peasant, a "barefoot doctor," a steelworker, and an electrician. As the story of each generation unfolds, Chang captures in gripping, moving -- and ultimately uplifting -- detail the cycles of violent drama visited on her own family and millions of others caught in the whirlwind of history.

About the Author
Jung Chang was born in Yibin, Sichuan Province, China, in 1952. She left China for Britain in 1978 and obtained a Ph. D. in linguistics from the University of York in 1982, the first person from the People’s Republic of China to receive a doctorate from a British university. She lives in London with her husband, Jon Halli day, with whom she wrote Mao: The Unknown Story.

A Must Read Book for Booklovers

First of all, excellent Packing and On Time Delivery by Flipkart, Thanks Flipkart. The book is about the journey of three generations through time and a well descriptive book. A must read book.
READ MORE

Written in a simple language. This book is worth a read. It explains a lot about China and it's history. I never knew much about China before reading this book. It is a must read if anyone is interested in world history.

The wild swans never loose the human touch even in the worst of situations!!!
READ MORE

Engrossing book. Best book of this genre that I have read
READ MORE

Very fast delivery.
The book is amazing. The packaging was really good too.
Overall 10/10
READ MORE

Read to know the untold story of common Chinese people

Not only a gripping tale of three generations of women, we also get to know a lot about Chinese history and the plight of the common people. It is a non-fiction novel, a memoir and a peep into the common mind.
READ MORE

a must read ,that its if u like anything to do with culture,political and life interdependence.read it in any case u cannot ignore this
READ MORE