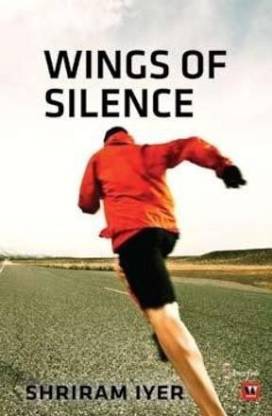 Wings of Silence is a novel written by Bangalore-born writer, Shriram Iyer.

Set against the raging time of the cold war between the US and the USSR, this title depicts the story of Sethi Brothers’ rollercoaster ride towards achieving their dreams. Saurav Sethi is a teenage prodigy and future tennis star in the making. But his elder brother Raj is almost on the brink of being swallowed by depression as his father Akshay Sethi turns a blind eye to a battle he is losing. But Saurav resolves to help Raj live the life he deserves. But his life changing decision help Raj realise his dream of running the marathon in the Olympics? Or will the family be left devastated to a point of no return?

Shriram Iyer is an Indian-born management professional based in Melbourne, Australia. He has compiled many short stories, short film screenplays, and theatre scripts. He is also a singer who has worked with Shankar Mahadevan. Wings of Silence is Iyer’s debut novel.

A "Must Read" Book

“Wings of Silence” is an inspiring and heart touching story of two brothers narrated in Indian and Western environments. It emphasis the value of family support, love, compassion, and discipline in every human achievement. The story is about how the stealthy reading of feeling and dreams expressed by absolutely deaf elder brother Raj Sethi in his diary makes the younger sibling Saurav, a child prodigy to sacrifice his promising career in academics and sports. Saurav helps Raj to accomplish hi...
READ MORE

A Great read and a feast for book lovers!

The Book -Wings of Silence by the Young Writer Sriram Iyer is
quite a feast in the literary sense.
This book shows the true relationship between the brothers as we know blood is thicker than water.I liked the book and it's title too, as it is an indication that silence also has wings.

This book is a visual treat as one will feel like reading this book continuously as every page grips you with this unquenchable thirst that keeping the book down is next to imposs...
READ MORE

This book stands out as one with rare accolades of telling a story in a smooth flow. Author has done a splendid job on his first project. The protagonist of book is neither Raj or Saurav sethi, it is the unnerving self belief and determination to achieve something exhibited by both of them. The message of the book delivers home - how an indomitable spirit is the linking pin between Hard work and Success.
READ MORE

A breath of fresh air!

A deaf boy who lives in India in the 1970s cowers beneath his younger brother who faces no challenges in life. A dominating Father from the airforce and a submissive Indian mother take the household to the US where life is different for them all. While in the US, Raj Sethi, the deaf boy, battles several challenges - he is deaf, cannot fit in, cannot speak, battles depression. He finds his true calling - Marathon running - and decides he wants to win Gold in Moscow in the 1980 Olympics.

Waiting4the book to be a movie

When you start reading Wings of Silence, you tend to go back and recheck if Shriram Iyer is a first time author!!. Read on to know why..

The read starts of with a glimpse of Ajay Sethi, a man of few words. The breadwinner of a typical Indian Family,who has the voice in the house.

For Ajay Sethi , an ex Air India Official, Discipline and success comes easily to him. Expecting the same from his Sons are something of second nature for him.

His sons Raj Sethi and Saurav Sethi as as different a...
READ MORE

Wings of Silence: What a fitting title!

The book revolves around two brothers, one of whom is born deaf.
Saurabh, the bright shining star of his parent's life, grows and flourishes in every walk of life thanks to the affection he receives. Raj, on the other hand is a bitter disappointment for his army retired father, Akshay Sethi, who manages to escape from the Pakistani Military camp. He is awarded the Veer Chakra, but bitterness doesn't leave him and he moves to America for a more lucrative future.
Saurabh adjusts with this new l...
READ MORE

What an inspiring story!

The author has done full justice to the story. The book reflects a very strong research on deaf people and especially their life back in the 70s.

Wings of Silence- Family vs. Dream. What would you choose?

Shriram Iyer’s Wings of Silence touched many emotions which perfectly depicted a family drama, passion, determination, and a fight for survival. Intelligently crafted to capture the minds of the audience right from the very beginning steadily building up the hunger to know what happens next. Characters so beautifully personalized made you feel strong emotions towards them. I was sad when I finished this novel because i wanted more. Cannot wait for Mr Iyer’s next release.
READ MORE

The kind everyone can relate to, the main character is NOT perfect, but is rather a realistic reflection of what we would be like if we were in his position - this only makes his story more compelling and his sacrifices more heartwrenching. The suspense keeps you reading, and the desire to see Saurav attain not only a "win" but also self-confidence, and self-appreciation, grows with every page. I recommend this book to anyone who likes reading realistic, well-researched stories with a believa...
READ MORE

Completed the book in 7-8 hours.. It's an absolute page-turner. The awesome bond between Saurav and Raj and the way it is portrayed, its just amazing. The love between the two brothers, the love of relatives, the way Raj copes up with his challenge... Every detail is carefully explained and that makes the book even more beautiful. Waiting for the next one...
READ MORE

0
0
Permalink
Report Abuse
+
All 18 reviews
Have doubts regarding this product?
Safe and Secure Payments.Easy returns.100% Authentic products.
You might be interested in