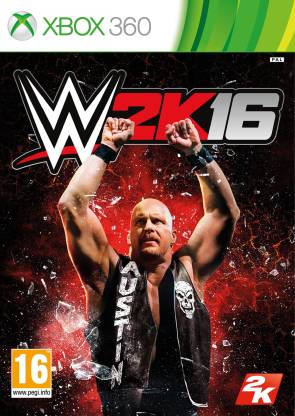 It’s time to step back into the ring with this edition of WWE wrestling action. The WWE 2K16 is the ultimate wrestling game out there and fans and gamers alike will be treated to authentic, high-powered and hard-hitting action.

Gameplay and Features
This edition also features the franchise’s ever-popular story-based mode, the 2K Showcase. It enables players to relive some of the iconic matches and moments in the WWE history. Apart from this, players also have to complete objectives to unlock legendary characters, entrance and ring gear, match types and other unlockables.

The MyCareer mode, the franchise’s career-driven mode is also featured in this edition. Players will need to make critical choices while rising through the ranks from NXT to WWE to earning a spot in the WWE Hall of Fame.

The game also features the franchise’s largest ever roster. Players can choose from a combination of current WWE Superstars and Divas, emerging NXT talent, WWE Hall of Famers and WWE alumni from multiple eras.

Game Mode and Rating
This PS3 game can be played in both single-player and multi-player mode. The game is rated PEGI 16 for blood, violence, language and suggestive themes.

Good game with addition of NXT but the xbox 360 version plays out same way like 2k14, 2k15 . For enhanced features go for the xbox one version if u got the console
READ MORE

best game of wwe till now

It is a very good game...with good graphics and fun gameplay...but i gave it a 4 star review because many controlls and game machanics have been changed from the privious games like wwe raw vs smackdown 2010 which i really enjoyed playing........over all i would say that maybe i am not fimilar with the game which is why i did not like it as much....but over time i think ill get used to it and will like it even more
READ MORE

FIFA16 IS BETTER THAN THIS

I am also a great fan of wrestling . I ordered it and played alot . But one day I went to my cousins house he was owing FIFA16 . I am not having interest in football. But when I played FIFA ,I found it better from WWE2K16 . Now I am waiting for FIFA17 to launch and I am gonna buy it
READ MORE

Waste of money and time. No use. I'm not telling to say that I don't like wrestling game. I love these games. But after buying we have to do so much work to play. See normal games like assassins creed are much easier than this game. No process. Just install it and enjoy. Not like this verrry poor game
READ MORE

At first the game was damaged .That was unexpected from Flipkart but it's ok.I replaced it and I got a good one.About the game.......graphics r good nice roster and nice OMG moments .NICE GAME WWE FANS MUST BUY
READ MORE

Awesome all the negatives are fake. (Negative reviews) good games. It is 10 times better than www 2k17. A must buy for PS3. It requires hardly1800 mb. Works well on the 12 gb consoles too.
Must buy
READ MORE

Not to good not to bad.it has no career mode in WWE2K16 PS3 VERSION there is the career MODE IN PS4 AND XBOX ONE because of this i didn't like the game.why did 2K do this they saperate PS3 AND PS4..please 2K update the version like PS4 WWE2K16 please..
READ MORE

Its good the stimulation is really good. And has tons of characters to play with. The career mode can be improved though. All in all a good game
READ MORE