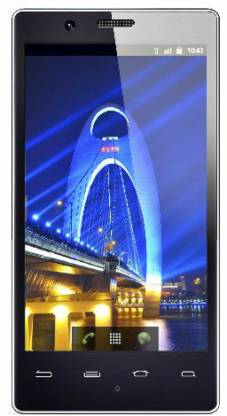 Intel has stepped into the smartphone market and tied up with Lava mobiles to bring out the Xolo X900 as its initial offering. The device comes in a sleek frame and has a candy bar form. This mid-range smartphone is run on the Android v2.3 (Gingerbread) OS and can be upgraded to the superior v4.0 (Ice Cream Sandwich) OS. The processor on the device is the Intel Atom which churns out an impressive 1.6 GHz of processor speed and is backed up by a substantial 1 GB of RAM which ensures that the apps on the phone are run in a smooth manner. Hyper-Threading Technology on the processor cleverly uses its ability to load apps in minimal time. The phone also contains a micro SIM card slot.

The display on the device is an enlarged 4.03-inch TFT LCD Capacitive touchscreen which gives an effective resolution of 1024 x 600 pixels. The high-end features of this device make interaction with the screen a very satisfying experience. The phone also contains a 400 MHz Graphics Engine which enhances the gaming experience of the user.

The Xolo X900 comes with an impressive 8 megapixel primary camera which is capable of high quality 1080 x 1920 pixel video recording and is backed up by a single LED flash. The secondary 1.3 megapixel camera allows the user to transmit better video quality when taking a video call. The camera possesses an 8x digital zoom and comes packed with features such as Autofocus, Touch focus, Burst mode and multi-mode. The Burst mode function allows the user to click multiple pictures in a short span of time for objects that are being shot in continuous motion with a single tap of the click button. Additionally, the camera is capable of recording HD or Full HD video.

The Xolo X900 is a sleek looking rectangular device with slightly curved edges. The phone has a minimal thickness of 10.99 mm and weighs in at a slight 127 g which makes it easy to hold in the palm of the hand. The considerable screen of this device is protected by the almost impenetrable Corning Gorilla Glass. The device comes packed with an Accelerometer which adjusts screen orientation depending on the direction in which it is held. Additionally, the Proximity sensor switches off the display when held close to the ear and the Ambient Light sensor adjusts screen brightness depending on the environment.

The Xolo X900 is capable of keeping the user connected to the internet at home, work as well as on the move. It features GPRS and EDGE technology to connect to the internet via the 2G network. For a faster browsing experience the device comes loaded with HSDPA and HSUPA technology which allow the phone to transfer data over the 3G network at a faster rate compared to other devices without this feature. The phone comes with WiFi capability to connect to a wireless network and can also be tethered to another device through the USB or WiFi hotspot function. The phone can also act as a navigation aid in the form of Google Maps which uses the device’s GPS support. This phone is also capable of exchanging data through the micro USB port or the Bluetooth function.

The Xolo X900 will keep the user entertained through the inbuilt music player or the video player on the device. Additionally, the phone comes with features like Dual Speaker, Ambient Noise Cancellation, a micro HDMI port and a Gmail app which combined with the other features, make this phone a worthy buy.

I have been using the XOLO X900 Intel phone for nearly a month now (bought it immediately after launch, obviously not through Flipkart) and am pretty satisfied with it. To set the context, my previous phone was Nokia E72 and I also have a Iphone 4s at home, so I have the required perspective on what is a good smartphone. Here is my quick review on this one.


PROS
• LOOKS – Good with a neat & polished finish – chrome finish on the sides & the rubberized back finish are quite nicely done. Extr...
READ MORE

Excellent phone in this price range

I had been looking to buy a phone in 20-25k range, it is then that I came to know about this phone. Wasn't considering to buy it then as Intel hadn't inspired much confidence about its SoC performing efficiently on mobile devices. What changed my mind tough were some of the test results that I saw on review sites like Anandtech etc. This phone outscored the likes of iPhone 4s, Galaxy s2, HTC one x in Linpack (processor performance), Sunspider (browser performance). In latter it even outscored...
READ MORE

Well for me, after an week of overnight research, I finally shortlisted Xolo X900, Moto Atrix 2, Samsung Galaxy S-advance, Sony Xperia Neo L, and Sony Xperia Sola. Among the others. Some of which's the rounded shape I didnt like and others were kind of heavy(Moto atrix 2 and Xperia Neo L). None of my friends were using this set, so it was kind of a bit risky decision to have go with this phone(not from flipkart though).

To be honest, in this range, I think Motorola Atrix 2 is perhaps the b...
READ MORE

I have been using this phone for close to 2 weeks now. Except the fact that the price of the phone dropped from 22000 to 17500 within a week of my purchase I am very satisfied with this phone.

Pros:
Hardware: Really good hardware and have never seen it lag. Had some issues with Skype video call and that is all. (It has been fixed in ICS upgrade).

Software: Yesterday I received an SMS from Xolo customer care that an upgrade to ICS is available to download. After the upgrade the phone just ...
READ MORE

Things you should know about this phone:

1. It is not a "Chinese phone" made by LAVA. It is marketed in India by LAVA.

2. Almost no UI customization by Lava - hence, a pure stock Android experience which the Samsung galaxy Nexus was proud of.

5. It came pre-installed with ICS.

6. You will have a hard time finding even a screen protector (i found two buyers in e-bay...one was selling it for 120...
READ MORE

Hello guys this is Agam... i purchased this phone from flipkart 4 days back with OS(2.3.7gingerbread).Initially i was really upset with the os as it is already outdated but then realize that the update is available for ICS(v4.0.4) which is the highest in ics.immideately i update my fone, now i am using it with ICS and having no problem at all.Some people have raised so many questions regarding apps supporting on intel atom processor.So to be very honest,i didn't feel any discomfort regarding ...
READ MORE

So I bought this phone nearly a month ago.....and I have to say, I'm impressed. For users complaining of low battery life, let me tell you something. For a phone with 1460 mAh, its a beast. I use it 2-3 hours of gaming and 1 hour for listening to music and the battery life lasts nearly a day.
The games run fast with 40+ fps. Camera's decent and graphics are very crisp.
However it lacks one thing. Compatibility. Nearly all the gameloft games (Amazing Spiderman, Dark Knight Rises, 9mm, M...
READ MORE

first of all hav 2 mention d amzing service provided by flipkart... got my phn in gr8 condition n well packed in jst 2 buisness days...!

abt d phn; i hav being using dis phn for d past 1 wk nw n hav 2 say im vry satisfied... its my 1st android so dint rly no wht 2 expct bt aft cmparin it vt a few odr phns i found out its d mst fastest cmpared 2 d ones vch r mch higher priced! so brilliant stuff 4m intel!

abt lava; u dnt hav 2 wory abt d branding coz drs nt even a single logo on the phn i...
READ MORE

>It is manufactured by Intel and 'imported' by Lava. Don't worry about the branding.
>Its blazingly fast. Did not experience any lag in past 3 days of use. All apps work really well without any issue.
>Answering my query Lava team (June 8th) told me ICS update will be "Coming in next few days. ICS is top priority". Intel developers are already testing it to make it bug free. Most likely its gonna be stock ICS just like stock GB it runs now (Stock =...
READ MORE

NEVER EVER BUY PRODUCTS FROM GUYS LIKE XOLO!!!!
My new handset, since the time i bought it, had some network issues which i couldn't get addressed(Within the guaranteed replacement period of 30 days) due to foreign tours.After coming back i called up flipkart guys, who easily washed off their hands and THE XOLO People, who got my phone 'Picked up' from my residence and for good fifteen days, the only response i could get was that my phone is under repair( This when i was promised the redelive...
READ MORE