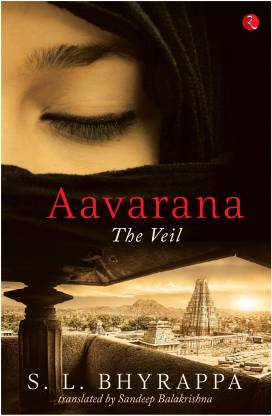 Aavarana: The Veil is the story of an independent woman and her personal journey as she tries to uncover the truth about religion, caste, and creed in India.

Aavarana: The Veil by S. L. Bhyrappa is a story of a free-spirited and rebellious young woman, Lakshmi, who marries the man she is deeply in love with. Although Amir, her husband, requests her to convert to Islam, she reluctantly agrees. Despite her father being completely against the marriage, she breaks ties with him and changes her name to Razia. However, things change for the worse and she discovers a different side to Amir. He is not the progressive and liberal person she thought he was. He along with his family forces her into practicing Islam. This sets Lakshmi on a journey to uncover India’s history about religion, caste, and creed. And she finds out that although the Indian society has come a long way over the centuries, it still remains as rigid as before.

Dr. S.L. Bhyrappa is a renowned Kannada author. With over fifty years of experience in writing he has authored 22 novels, most of which have been translated into malority of the Indian languages. He was honored with the Sahitya Akademi award and Saraswati Samman award. He has authored books like Daatu and Mandra. He is currently based out of Mysore. 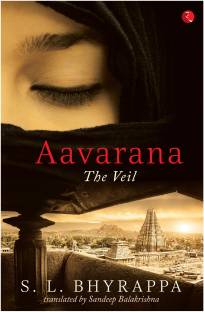 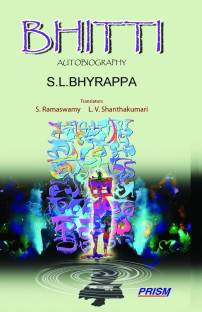 I have heard about S L Byrappa and his writings from my Kannada friends. Since i didn't know Kannada I never read his books.
And finally this book came out. And the better news is that it was translated by one of my favorite bloggers Sandeep Balakrishna of 'sandeepweb'...

Book was really really good... It didn't feel like a translation... Language is simple as well...
The basic theme of the book is to expose the hypocrisy of Left-liberals and their school of thought. It shows how they have s...
READ MORE

A Must read for all book lovers!

This is one of the best literary work of S L Bhyrappa, The story is very gripping, i loved the way the story shapes and then moves with many turns and twists. The follow of the story is superb.
Bhyrappa has done extensive research for this book, it has all the reference from which this book is inspired or referred.
READ MORE

Came to know about the book from Shri J Sai Deepak ji.
Would recommend this book to anyone who wishes to get a glimpse of what real history is, and what concocted stories we are being fed by the Marxist historians in the garb of 'secularism'. A book which exposes the left ecosystem which has an unfettered control over most of the institutions in India.
The book calls a spade a spade, and does not inhibit from calling out the atrocities carried out by invaders and marauders in the whole of Ind...
READ MORE

The book that tries to uncover the viel

SL Bhyrappa questions the hypocricy of the left based historians whose agenda is to generally mask the mis-deeds of the mughal kingdom. This best seller in kannada is well translated into simple english by Sandeepji.

The youth, instead of wasting their hard earned money into stupid bollywood movies and IPL cricket matches, could as well buy these books and circulate them to a wider audience so that certain healthy debates can be initiated.
Unless we learn form our historical mistakes, hist...
READ MORE

This book, an english translation of the original book written in kannada by S L Bhyrappa. A brilliant book which presents to the reader the muslim rule in India during the Moghul period. The collectivist novel technique which is making the historical evidence in built in the novel is a brilliant concept. It also reflects the so called "intellectuals" of the modern day and their efforts of covering historical truth. Just like Dan Brown's "Da vinci Code" talks about Christianity this book deal...
READ MORE

So my friend recommended this book months ago, and I'm pleased I ordered it. S.L. Byrappa Ji gives an high insight of historical India and some Prejudices that a certain religion holds. I loved every chapter of this book and recommend people to gift it to your friends, relatives, etc.
READ MORE

Avarana is one of the greatest Books I have read: I am agreat Book Lover soMy comment like this is Unique; The writings by authorevokes spellbound attention and historical facts he gives is excellent and I recommend this book to all ..not only to Hindus but to all. Excellent Book...Congrats to the author.
Thx
DR.Umesh
READ MORE

One of the Best Books i have read in the recent times.. Sandeep B has done full justice in translating the original work of Shri Bhyrappa.

As described by the author, The story has been wonderfully written without compromising on any historical Facts. and the storyline itself has been kept so intresting despite the work actually being a Historical one, it classifies this work into a masterpiece.

The writer was completely succesfull in his intention of creating a Historically Accurate Storyl...
READ MORE

Must read for all Indians

This novel is an eye opener. I salute the author for giving us this master piece. I have had numerous discussions on the topics covered by this novel among my friends and now after reading this novel, I have come to a conclusion that there is no need to re invent the wheel as the author has done the job very precisely and in an interesting way.
READ MORE

0
0
Permalink
Report Abuse
+
All 70 reviews
Questions and Answers
Q:Total Pages of The Book ??
A:387
Flipkart Customer
Certified Buyer
0
0
Report Abuse
Read other answers
Q:can I get Gujarati edition for this book?
A:NO
RetailJumbo
Flipkart Seller
0
0
Report Abuse
Didn't get the right answer you were looking for
Safe and Secure Payments.Easy returns.100% Authentic products.
You might be interested in