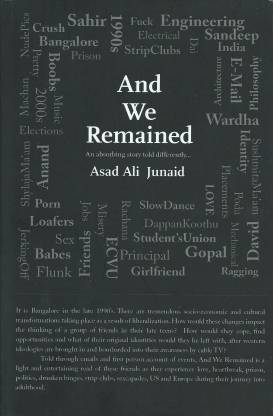 This is a story that was meant to be told. Also, the story is not short and had to be narrated in a different way. Here is the story of the lives of five friends who started off as engineering students.

And We Remained is a gripping story with a unique narration style. It is a 51,000 word novel, and the story is set in the 1990’s when India was going through major socio-economic changes.The story is about the lives of five engineering students who have been friends for a long time – Sahir, Sandeep, Gopal, Anand and David. It also speaks of the women in their lives, especially Wardha. The story is intertwined and is told by each of the friends from a first person perspective of the given event. The events that had taken place during their college years are a contrast to the lives that each of them live in their later lives. Even after years, they have kept in touch and narrated their experiences in life both in India and abroad through e-mails. This is an amusing story of their individual journeys through college, love, heartbreak, prison, politics, alcohol, strip clubs, US and Europe.

Asad Ali Junaid is a design professional in Bangalore. He works in the area of Human-Machine Interaction. And We Remained was a book that started off with a need for the story to be told, and one which needed to be told differently. He joined the 'Just Write' fiction writing workshop and soon learnt some story telling skills.

The cover is definitely captivating and so are the pages inside. The book makes for a light-hearted, delightful read that keeps you smiling all the way through. A good travel companion. It makes you go back in time if you are through your college days reminding you of your own goof-ups and fun times!!!! Relish it.
READ MORE

A uniquely narrated not so uncommon tale !

A very light read. Style of narration is the icing on the cake for this short novel. You feel as if you are one of the characters of the story that is unfolding in front of you. At the end, you even feel it would be nice if you knew the characters personally. The transitions from flash-back to present are so well timed and elegantly managed, that you hardly feel any discomfort adjusting to the settings. With the language easy to comprehend, you can easily finish it in one sitting. A decent de...
READ MORE

The story is described in a different and unique way. At the very beginning it struck to me that the narrating style is a bit confusing but as the story goes on I find this style unique and innovative. This story is narrated i...
READ MORE

A light and refreshing read!

'And We Remained' tells the story of not just 5 friends, but the story of every college student..studies, love, breakups,the raging hormones (at least in the case of guys), occasional but inevitable tiffs with the college authority etc. It describes every kind of emotion that a person goes through in his/her college life. You are neither a teenager or a complete mature adult (emotionally and mentally). The many challenges that you must face to achieve your goals and dreams and the happiness ...
READ MORE

A refreshing read after long!

This is something refreshing after long! A good read and total fun, that anyone from hostel and college years can relate to practically. Difficult to put down once you start-off ! No morals or lessons ... narrative and contemporary style of writing. Do grab your copy today .... Happy Reading! Hope we get some more soon ... Thanks Junaid Asad
READ MORE

Engrossing. Finished in one day

I went through this book as my friend recommended it. I am not book lover and reading any book after months. Initially i was not interested to pick up but could not leave it once i started reading it. Great attempt by Author considering it is his first book.
READ MORE

And We Remained- a fabulous read!!

This is the second time I've read this book and so felt like writing about it. It is totally engrossing and a fabulous read!!! I loved the book!!! Its a book which one can relate to and the one that really takes you over for a walk back into your college life! Moreover it surprises you through its story plot and gives immense pleasure by just going through a few of its chapters all over again and reliving those little moments of joy lying therein. Its happy, sad, funny, naughty, crooked, witt...
READ MORE

First Thanks Asad for giving me this book for an Honest feedback.

About the book.
The first thing which stuck me was the narration style with alternate chapters representing the story and Email Dialogue about the same incident in the story.
Pretty unique and took some time getting used too. I liked it .
The conversation in the mails was pretty interesting.

The story revolves around a bunch of guys who start in the college and end up in there life.
The story contains the normal college Drama...
READ MORE

A Refreshing Read with unique narration

We've read college stories before, and a lot of them with an engineering background too. What's unique about 'And We Remained' is the style of narration. Each chapter is narrated in first person by each protagonist and there are other chapters with email conversations. The era (1990s and the next decade) is very interesting and not much is being written about people who lived and studied in school/college in the pre-mobile phone period.

The characters are well sketched and their woes are po...
READ MORE

0
0
Permalink
Report Abuse
+
All 16 reviews
Have doubts regarding this product?
Safe and Secure Payments.Easy returns.100% Authentic products.
You might be interested in