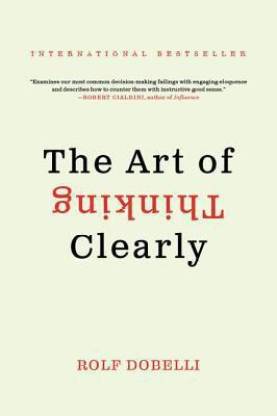 The Art of Thinking Clearly is a book on human psychology and reasoning by Rolf Dobelli.

Rolf Dobelli writes about cognitive errors and how to avoid them. He speaks out to readers who have continued to make mistakes by following useless pursuits or doing things which are ultimately bad for them. He tries to help them understand why human beings tend to think with their heads foggy, and shows how to clear the fog and think clearly. He presents 99 chapters on the errors of judgement, and helps readers make things clear for themselves before making decisions. An ideal read for anyone who has discovered that they have been letting their emotions get in their way and wish to clear the fog.

Rolf Dobelli is a writer, speaker and thinker. The founder of Zurich Minds, he also co-founded getAbstract, a company involved in publishing compressed knowledge. He enjoys writing, sailing and flying planes and is based in Switzerland.